Which goalies should kick off the season with the Winnipeg Jets?

Biggest question for the Jets in training camp.

Last season we saw a trio of goalies play games for the Jets as Ondrej Pavelec, Michael Hutchinson and Connor Hellebuyck all played around the same number of contests.  Pavelec played in 33 games, Hutchinson in 30 and Hellebuyck got into 26 games for Winnipeg when Pavelec went down with an injury on November 21st.  The only one of the three that can be sent down to the Manitoba Moose without having to clear waivers is Connor Hellebuyck who remains on the last year of his entry level contract. 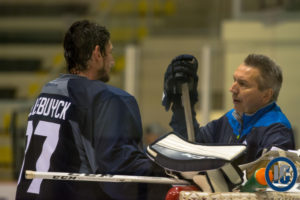 Statistically, when you look at the numbers from last season it is clear that Hellebuyck was the leader in most categories as he possessed the best goals against average (2.34), best overall save percentage (0.918), best 5 on 5 save percentage (0.941), best adjusted goals against average (2.81) and he also had the same number of quality starts as Pavelec but did so in fewer games (.538 vs. 452 respectively) to name a few.

Another stat worth noting according to Greg Balloch of In Goal Magazine is GSAA (goals saved above average) which can be broken down as follows:

You take the league’s average save percentage and apply it to the amount of shots a particular goalie has faced. You get a number of goals that the average goalie in that league would have surrendered if they faced the same number of shots as the goaltender in question. That number gets compared to the number of goals surrendered by that goaltender, and a plus/minus is created. If a goalie is in the positive, that is how many goals they have saved compared to a league-average goalie. If they are in the negative, then it is safe to assume that they are performing worse than how a league-average goaltender would perform in the same situation.

Once again Hellebuyck was the Jets leader in this category last season and the only Winnipeg goalie whose numbers were on the positive side of the scale (27th overall last year with goalies who played 20 or more games).

If the stats suggest that Hellebuyck should be the guy, then what happens with the other two goalies?  Who gets sent down?  Will the Jets send Ondrej Pavelec down when he has a cap hit of 3.9 million for next season?  Will they take a chance of sending down Michael Hutchinson, who they recently signed to a two year deal (1.15 million AAV), but could be claimed and which could impact the team for the expansion draft next summer.

Not to be lost in all of this is what it may do to the development of Eric Comrie who has continued to progress when he took the reins for the Manitoba Moose in the AHL last season when Hellebucyk was called up to the NHL. 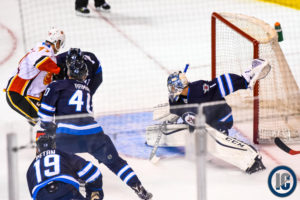 So far this pre-season four goalies have played in one game:

Ken Wiebe of the Winnipeg Sun spoke on TSN Jets last night about the prospect of the team carrying three goalies to start the season.  NHL teams have a 23 man active roster during the season and traditionally only carry two goalies with 13 forwards and eight defencemen.  If the Jets held onto all three it would require some tinkering with the number of forwards/defencemen the team kept up.

What we do know is that Connor Hellebuyck will be pushing for his chance to take the mantle as starter for the Winnipeg Jets to kick off the 2016-17 season.  Who would you like to see as the Jets duo when the team kicks off the 2016-17 season on October 13th against the Carolina Hurricanes?  Or would you like to see the team carry all three netminders to kick off the season?

*Thanks to Puckalytics.com, Hockey Reference and Dobber Hockey for the goalie statistics and In Goal Magazine for the breakdown of GSAA.