What does being in a playoff spot at U.S. Thanksgiving mean for the Winnipeg Jets

Time to plan a whiteout or version 2.0 of that tradition?

While our friends south of the border enjoy a day full of NFL football and turkey, today is a special day as well for those prognosticators who want to evaluate their pre-season predictions.  Not many pundits gave the Jets much of a chance before the season began and taking a look at their Central Division competition it isn’t difficult to understand how they reached that conclusion.

Fast forward seven weeks to the present and the Jets are sitting 8th in the Western Conference (4th in the Central).  Why is this relevant?  The Toronto Star did a study of what it meant for teams who were in the playoffs on U.S. Thanksgiving and the results were as follows:

“Each year, typically 12 or 13 of the 16 teams in playoff spots at this point, with roughly 25 per cent of the season done, keep their spots by season’s end.”

So is it time to plan a whiteout or whatever the Jets 2.0 version will be called? 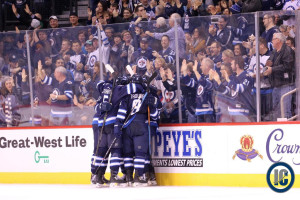 Probably not with so many teams so close to the playoff line but for Jets fans it is a lot better for your team to be on the inside, than on the outside looking in.

It is also worth noting that the Jets are just four points back of 2nd in the West and three back of 1st in the Central (Nashville/St. Louis) although all those teams have a few games on hand.

So what do you think?  Will the Jets be playing meaningful hockey in April?  Or is this just a tease as the team continues to build for the future?