What are the Winnipeg Jets going to do when the forward core is healthy?

What does coach Maurice do with a 100% healthy forward group?

Once an NHL season begins no team is ever going to be 100% healthy.  Throughout the course of a season every team inevitably deals with minor or major injuries to players on their team.  The Jets learned this first hand when they lost second line centre Bryan Little in the 1st period of the first game of the season.

In addition to Little (16 games) the team has lost Drew Stafford (11 games), Shawn Matthias (7 games), Mathieu Perreault (6 games) and Joel Armia (6 games) to various injuries.  Now as I documented last week the Jets will be without Matthias and Armia until December or January so they will not really factor into any decisions for the Jets coaching staff in the near future.  While Perreault was recently added to the IR, he along with Drew Stafford and Bryan Little could be making their returns to the lineup in the near future.

In their place the Jets went to the Manitoba Moose pipeline for a number of players who have really taken advantage of the opportunity once promoted to playing with the big club.  Including: 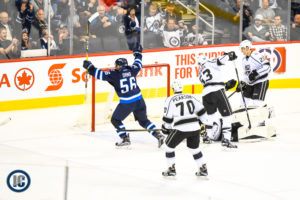 This inevitably leads one to ask who might the Jets remove from their lineup to re-insert one of these veterans once they are ready to go?  Despite the fact that this Winnipeg team is rolling with the present lineup right now at 4-2-2- in a really tough November stretch, coach Maurice indicated following the 3-2 shootout win over the Kings on Sunday, when asked about the play of Dano, Copp and Petan and potential roster moves that “there are certainly players I think that when you look at them, and their pedigree and what they’ve done here, when they come back and they are healthy, they are going back in the lineup, and we will figure it out from there”.  Being a veteran coach we don’t know if he meant one veteran player or all of them and he also doesn’t indicate whether any of these three aforementioned players would be the ones coming out.

The tough decision may be staved off due to another injury to a forward as it was reported yesterday that Alexander Burmistrov (15 games 0 goals 2 assists) will be out of the lineup day-to-day with an upper-body injury, although we don’t have official word from the team yet.

Of course the team has a number of other players who may be subject to time in the press box or being sent to the Manitoba Moose when these veterans return.  Rookie Kyle Connor (16 games 1 goal 3 assists) may still need some seasoning which, as we are seeing with Jack Roslovic (12 games 3 goals 7 assists, leading Moose in scoring) isn’t necessarily a bad thing for a young prospect.  Perhaps Brandon Tanev (17 games 2 goals 1 assist)(less likely) or Chris Thorburn (12 games 0 goals 0 assists)(more likely) may be the ones taking a seat.

Factoring into the decision will be ease of movement between the big club and the farm system.  Guys like Petan, Copp and Dano (and Tanev) do not have to pass through waivers so they can be sent down without concern that will be claimed by another team.

Which all means that there are going to be a number of tough decisions upcoming for the Winnipeg coaching staff, which may be compounded by a team that continues to win, despite all these injuries.