What about the Winnipeg Jets Power Play?

Last Wednesday, Illegal Curve’s Richard Pollock wrote an article about  the Winnipeg Jets (Atlanta Thrashers) penalty killing and how it needs to improve significantly from last season in order for the Jets to improve its overall record this season.

In today’s column, I’m going to look at the Jets power play, including how it did last season (hint: not as bad as you think) and how it can improve this season.

In 2010’11, the Thrashers’ power play was ranked 12th in the National Hockey League at an 18.3% success rate (53 goals). The team’s top goal scorers were Andrew Ladd (9 power play goals), Dustin Byfuglien (8 PPG), Tobias Enstrom (6 PPG) and Nikolai Antropov (6 PPG) (Anthony Stewart and Rich Peverley each had six power play goals last season but are no longer on the Jets roster).

The Thrashers power play last year was at times explosive and featured good puck movement at both the forward and defense positions. Dustin Byfuglien and Tobias Enstrom paired up on the backend of the first PP unit while Andrew Ladd, Bryan Little and Blake Wheeler (post-trade) were usually the forwards on the #1 unit.

More on the Jets Power Play after the jump.

The Jets first unit possesses many excellent qualities moving forward and a lot of talent at each position, starting with the two point men on the power play, Tobias Enstrom and Dustin Byfuglien.

Enstrom had his best year as a pro last year, registering 51 points (10 goals and 41 assists), while establishing himself as an elite offensive defenseman in the NHL. Enstrom led all Thrashers last season in Power-Play time on ice, averaging 4:32 minutes/game. At his age (26 years old) and physical condition, Enstrom often likes to stay out for 75 seconds or even the full two minutes of a power play and because of his speed and passing abilities, was utilized by Craig Ramsay frequently on the man advantage last year.  For the most part, it paid off.

Enstrom’s partner in crime, Dustin Byfuglien averaged 4:02 minutes/game and was effective more as a shooter than Enstrom who is clearly a pass-first player (Byfuglien had 347 shots on net last season, Enstrom had 113 shots on net). Byfuglien is a hulking individual (6’3”, 240 lbs.) who is effective at using his size and strength along the boards and in front of the net which allows the crafty Enstrom to orchestrate his magic. Enstrom and Byfuglien work very well together and will surely form the top defensive pairing on the power play this season for Jets Head Coach Claude Noel. The only recommendation for the first power play defense pairing would be for Enstrom to shoot more but in my opinion, this is one of the better power play pairings in the league.

The Ladd-Little-Wheeler forward unit isn’t flashy but it was extremely effective last season. Centre Bryan Little, who is smallish and not particularly good in the face-off circle (46.3% last season) complements Ladd well because he is a creative, fast player who can shoot as well as pass into traffic.

Andrew Ladd led all Thrashers forwards in points last season (59), and led the team in time on the power play as well, averaging 3:02 min/game. Ladd is the muscle, so to speak, on the Jets top power play line. Ladd has an underrated shot and has good vision on the ice but his greatest asset is his work ethic and tenacity. Ladd never gives up on loose pucks. His  forechecking ability will allow the Jets to play a dump-and-chase style as required.

Blake Wheeler was a big addition to the power play–no pun intended. Wheeler’s offensive opportunities increased substanitally in Atlanta, as he lined up on the power play alongside his even strength linemates Ladd and Little.  The trio has a nice mix of size, speed and shooting ability.

Nik Antropov played on the power play last season with both Ladd and Little and Ladd and the since traded Rich Peverley. The knock on Antropov (6’5”) is that he doesn’t shoot much and that he is not as swift as he once was (if ever) back when he was on the Toronto Maple Leafs but he can still play an effective north-south game on the power play. Antropov is best when he is in front of the net or coming off the half-boards. Antropov also had a better face-off percentage than Little last year (48.7%). 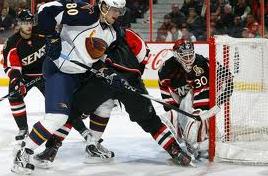 The second power play unit last season for the Thrashers was usually Zach Bogosian (1:58 mins/game) with one of Ron Hainsey (0:38 mins/game) or Johnny Oduya (0:28 mins/game) on defense and Evander Kane, Anthony Stewart on forward and a number of other players on forward. With Anthony Stewart (1:17 mins/game) signing with the Carolina Hurricanes and mid-season acquisition Robbie Schremp (1:46 mins/game) leaving to play for MoDo of the Swedish Elite League, Alexander Burmistrov should see increased ice time from his 0:18 mins/game.  Also expect Antropov to become a mainstay on this unit–unless he is traded.

As mentioned above, Coach Claude Noel will look to employ Burmistrov as the second power play centre as his talent level and playmaking abilities may be top-3 on the team. Kane and Antropov give the second line size and speed on the wings and both have good shots off the rush.  The young Russian was spectacular at times and invisible at other times, but is the key to the second line’s ultimate success. Burmistrov needs to continue to mature and improve the physical aspect of his game. He has been known to lack vision and hockey smarts. Having said that, the team’s second forward unit has plenty of skill and should improve as they play more games together.

The ex-factor on the second power play unit is Bogosian, who as of August 22nd, remained a restricted free agent. Bogosian has untapped offensive potential that most scouts believe is just waiting to come out. During the Thrashers last game of the season, a game which they lost 5-2 to the Pittsburgh Penguins, Bogosian played 6:08 of power play time, a game in which he played over 26 minutes, leading both teams. Bogosian did not register a point in the game and was minus-2, but his skating ability and offensive talent forced Craig Ramsay to play him for almost half the game.  Hainsey and Oduya will compete for the second pairing with Bogosian, with my nod going to Hainsey. Even though Hainsey takes too many risks, he has an excellent shot and is more effective offensively.

Overall, I would say that the Jets power play as it stands now is a 7.5 out of 10 or 11th to 13th best in the NHL. If the Jets centres (Little and Burmistrov) improve in the face-off circle and Burmistrov displays more consistency offensively, I think it may even be better than that (5th to 7th).