MTS Centre about to get a facelift. 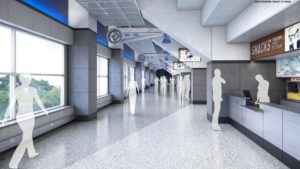 Looks like the home of the Winnipeg Jets and Manitoba Moose is about to get a 12 million dollar facelift according to True North which owns the teams plus the arena they play in.

New lighting, flooring, ceiling, and signage are all part of new renovations for the MTS Centre scheduled to be completed by late fall of 2017. True North Sports + Entertainment announced today that starting this week, building upgrades will shift from work in the arena bowl to comprehensive renovations in the concourses, and in the Portage Avenue atrium, transforming the overall experience for Winnipeg Jets fans inside the MTS Centre. Additionally, new food and beverage options will be added.

The new colours will emulate the Winnipeg Jets brand colour palette while incorporating an aviation theme of glass, steel, and rivets. The planning for the renovations has been in development for over three years. Norva Riddell, True North’s senior vice-president of sales and marketing says, “the 2017 MTS Centre Concourse Renovations Project is a significant upgrade that will be completed in a series of phases over the next several months. During the renovations, True North Sports + Entertainment is committed to keeping fans informed with progress updates on www.winnipegjets.com, social media, and with direct communication to our seat holders.”

Estimated at $12 million, the renovations project is fully ownership funded, and represents True North’s ongoing commitment to reinvestment in the MTS Centre.

For the full release and more pictures click here.

Off the Post: State of the Jets – Two superstars, sure, but what else?
Winnipeg Jets Morning Papers