Top 5 Jets games at the MTS Centre to date.

The Jets are now playing their fourth season at the MTS Centre and while this season is still young, we were treated to quite the show when Sidney Crosby and the Penguins came to town yesterday.  It was easily the best home game of this season and that got us chatting in the press box about where it stood amongst the best Jets games we’ve seen in downtown Winnipeg since the return of NHL hockey.

Here is my list of the Top 5 games I’ve seen which is based on both quality of the hockey and the atmosphere at the MTS Centre.

5.  vs. Flyers (Tuesday, February 21st, 2012).  The Jets looked to be cruising to a 4-3 win but with the goalie pulled, twenty seconds on the clock and with the MTS Centre fans cheering what appeared to a regulation victory, the Flyers James van Riemsdyk rushed up the ice went around Enstrom and centered for an open Wayne Simmonds who tied it up with ten seconds to go on the clock.  With less than a minute in OT Jaromir Jagr completed the comeback to give Philadelphia the win. 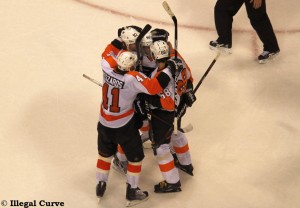 4. vs. Islanders (Saturday, April 20th, 2013).  The MTS Centre was rocking on a Saturday night during the end of the lockout shortened season as the Jets had won five games in a row in their quest for their first post-season appearance since they moved to Winnipeg and just the second in franchise history.  Entering game 45 of the season, the Jets sat in 9th place in the East with 48 points, two points behind the 8th place Rangers and three points behind the 7th place Islanders.  It was a sloppy game which made for exciting hockey between two teams battling for the playoffs.  Winnipeg came back from a 3-1 deficit and needed a Bryan Little late PPG in the 3rd to tie the game and send it to extra time.  The Islanders won it in a shootout much to the chagrin of the 15,004 in the building.  While it may not have been a playoff game it gave fans a glimpse of what the playoffs may be like at the MTS Centre.

3.  vs. Ducks (Saturday, December 17th, 2011).  The Jets won 5-3 on the night Teemu Selanne returned to play in Winnipeg for the first time since February 4th, 1996.  The atmosphere in the building was electric and it was perhaps one of the most unique nights I’ve spent in an arena, which coupled the cheering whenever Selanne touched the puck with the booing his team mates received from the MTS Centre crowd.

2. vs. Penguins (Thursday, November 6th, 2014).  Last night’s game against the Penguins was just a spectacular affair.  Pittsburgh was riding a five game winning streak against the Jets three gamer.  While Winnipeg scored first, the Pens got the next three and it appeared the visitors may be cruising to an easy road win.  Young Jacob Trouba almost ripped the netting with a late 2nd period goal and Evander Kane scored his first of the season and 100th NHL goal of his career in spectacular breakaway fashion to tie the game 3-3 and send it to OT.  There were a combined 102 minutes in penalties and you had guys like Kane and Wheeler engaging in fights.  While I don’t like putting shootout games on this list you cannot help but appreciate everything we saw in last night’s game. 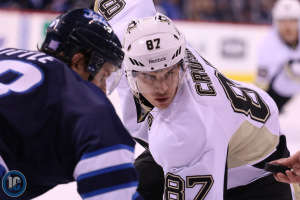 1.  vs. Bruins (Tuesday, December 6th, 2011).  The Boston Bruins were in town with an impressive 15-game point streak which Winnipeg ended in regulation 2-1.  Pavelec put on quite the performance stopping 39 of 40 shots in the win.  It was one of those improbable wins early in the Jets return and it was the type of game that had fans on the edge of their seats the entire game.

Of course the Jets have now played 113 regular season home games in downtown Winnipeg so I’m sure I have missed a great game or two or three on my list.  As always feel free to add your own Top 5 games you’ve seen at the MTS Centre.