The Moose played three home games this week, finishing with a record of 2-1-0. They swept Calgary’s farm club, the Stockton Heat, winning 3-0 on Monday, and 3-2 on Wednesday. However, they were outmatched against a playoff-hungry Charlotte Checkers club (Carolina Hurricanes AHL team), losing 6-2 on Saturday night.

The best performers this week were the usual suspects – Connor Hellebuyck won both of the games he started on Monday and Wednesday, including a shutout on Monday, and over two periods of shutout play on Wednesday. In all, Hellebuyck had an 8-period shutout streak, dating back to the prior week’s action. John Albert had a goal and two assists this week, while Brenden Kichton had two goals and an assist in the two games he played (he was recalled by the Jets in case Jacob Trouba couldn’t play, but ended up being re-assigned on Saturday as Trouba was healthy enough to go). Scott Kosmachuk also scored in his return to the Moose on Saturday. 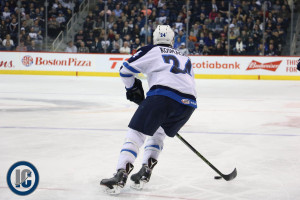 Kyle Connor’s University of Michigan Wolverines were eliminated from the NCAA playoffs on Saturday night, losing 5-2 against the top-ranked team, the University of North Dakota. Connor managed to extend his 27-game point streak with an assist on J.T Compher’s game-tying goal in the third, but UND kept coming in waves, registering nearly 50 shots in the game.

Connor ends the season with 35 goals and 36 assists in just 38 games, tying Jack Eichel’s point total from last season with 71, despite playing two fewer games. All the talk now surrounds whether or not he’ll turn pro, and if so, when? Bob McKenzie confirmed in a tweet this weekend that if Connor signs and plays an NHL game this season, it will burn a year on his entry-level contract. On one hand, it means that he’ll be able to reach Unrestricted Free Agency a year earlier – though still not until 2023; the bigger question is how this must affect his status in an NHL expansion draft. Currently, the expectation on player protection rules is that teams will be able to protect either 3 defencemen, and 7 forwards, or 4 defencemen, and 4 forwards, along with 1 goaltender in either scenario. Furthermore, players who have played two or fewer seasons in pro hockey (not necessarily in the NHL), will NOT need to be protected. So in the event that Connor turns pro this spring, and plays a game, he would not be eligible for an expansion draft in June, 2017. However, if there if the league expands by one team in 2017, and another team in 2018, then Connor would need to be protected for the second expansion draft. As a result, some believe it would be best if the Jets wait to sign Connor until after the season ends.

Beyond all this, perhaps a bigger question is, is he ready? While his stats match up well with Jack Eichel’s from last season, the overwhelming majority of scouts would agree that Connor is not as talented as Eichel, who was deemed by many as a generational talent. Perhaps a better comparison for Connor is Detroit’s Dylan Larkin, who also played at the University of Michigan, just one year earlier, and has had a tremendous rookie season in Detroit this year, with 21 goals and 43 points through 73 games. While Larkin has a slight edge in size and speed, Connor is at least his equal in skill.

Another issue is the demographics of the Jets’ projected roster for next season. At this stage, the Jets only have four forwards who have scored over 150 career points – Drew Stafford, Bryan Little, Mathieu Perreault, and Blake Wheeler. Barring other additions, the most likely candidates to fill the other spots in the top-9 are Mark Scheifele, Nik Ehlers, Alex Burmistrov, Joel Armia, Adam Lowry, Marko Dano, Nic Petan, and Andrew Copp; with the exception of Burmistrov, all the other forwards are under 24. Depending on where the Jets pick in the draft, there may also be a highly talented teenager who may challenge for a spot. Do you run the risk of creating an Edmonton-style situation by putting so many inexperienced players together? At this stage, there are certainly more questions than answers.

Regardless, my bet is that Connor will turn pro this spring – likely sooner than later.

Nic Petan has had an interesting season, to say the least. After starting the year in the NHL and scoring in his very first NHL game, he was held pointless in the next 13 games, and was sent down to the Moose. In the AHL , he has 32 points in 47 games, and leads the Moose in points-per-game. When injuries struck in the past few weeks, he was recalled to the Jets, and has been held pointless in 5 more games.

Has this season been a disappointment for Petan and the organization? While you could argue that he was mishandled early on, Petan has been pretty resilient this year. Stuck in a fourth line role for the majority of his 19 NHL games, his opportunity to create offence is limited when paired with guys like Chris Thorburn and Andrew Copp. In the one game where he was elevated to the top line – Tuesday night against Vancouver – he registered 5 shots in 20:33 of ice time, and if not for spectacular goaltending by Jakob Markstrom, and a bit of rotten luck, he would have had two or three goals on the night. Similarly, his play on a struggling Moose squad has been about as much as you could expect. He didn’t benefit from playing with left wingers like Thomas Raffl and Matt Fraser, as each had their struggles this season. The one player he found chemistry with was Scott Kosmachuk, and the two had a terrific February playing together.

The question for Petan is what type of player he can be at the NHL level. My opinion of him – my expectation of him, is that he can be Mathieu Perreault’s replacement in 2017-2018. A small but versatile forward who plays centre or left wing, Petan has the same type of hands, vision, and offensive awareness as Perreault, including the ability to dominate from the half-wall on the powerplay. But Petan will need more time in the minors to work on his game, just as Perreault did when he was entering the league. Mathieu Perreault played 167 games in the AHL before he made it to the NHL full-time, around age 23. Meanwhile, Petan will turn 22 in March, 2017, a few months before Perreault’s contract expires that summer.

While having success in the AHL by no means assures NHL succcess, for a small offensive player like Petan, dominating the AHL is typically a pre-requisite of winning an NHL job. On that note, it would be nice to see Petan start next season in the AHL, and score at around a point-per-game clip before he gets consideration to join the big club.