The Moose ended February with a two-game series this weekend against the Charlotte Checkers, taking the first game in a 7-2 blowout, but losing yesterday’s game, 2-1. Overall, their play of late has been extremely encouraging, as they continue to get great goaltending from Connor Hellebuyck and Eric Comrie, and have added an offensive dimension to their game which was sorely lacking in the first half of the season. 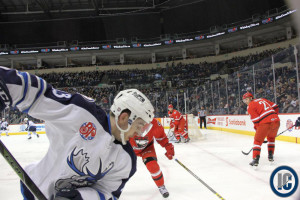 The Moose had a record of 6-5-2 in February, and outscored their opponents 46-40. To put that in perspective, in the first 43 games of the season, they scored just 85 goals – barely two per game. Scoring 46 goals in the past 13 games – 3.5 per game – is like watching an entirely different team. Where is that offence coming from? It’s mostly based on the work of the young up-and-comers – Petan, De Leo, Lipon, Morrissey, Kosmachuk, and Brassard, along with a now healthy John Albert. The season splits gathered last week have only improved for many of the players listed, particularly Austen Brassard, who posted 4 points this weekend, and Josh Morrissey, who continues to rack up points from the blueline. After starting the season with just 2 points in his first 22 games, Morrissey now has 20 in his last 34.

A team which sputtered for most of the first 40 games of the year is now playing with a new-found confidence. Connor Hellebuyck was asked on Sunday if he noticed a difference in the play of his blueline in the time he was away with the Jets – a gap in time from November 20 – February 14. He specifically mentioned the play of defencemen Josh Morrissey, Jan Kostalek, and Peter Stoykewych, raving about how far they’d come in the 8.5 weeks he was away from the team. As a goalie, his assessment of these young defencemen is probably more meaningful than it would be coming from any other source. With the Jets currently struggling to bring positive news to a hockey-mad market, perhaps the Moose can fill part of the void for the remainder of the season.

Kyle Connor is Having a Historic Season

If you have read some of these items recently, you know that Kyle Connor is a frequent topic of conversation. He’s in the midst of a 19-game point streak, during which he’s scored 21 goals and added 21 assists. To say that he is exceeding expectations would be like saying that Dustin Byfuglien is “strong” – it’s leading you in the right direction, but it’s a massive understatement. Connor is having a season for the ages; in the table below, you’ll see 13 former college players (plus two Jets prospects, Connor and Roslovic), most of whom went on to even greater success in the NHL. It shows what kind of stats they had in their freshman year in the NCAA, whether they ever won, or were nominated for the Hobey Baker, which is awarded to the top player in college hockey, where they were drafted, etc. 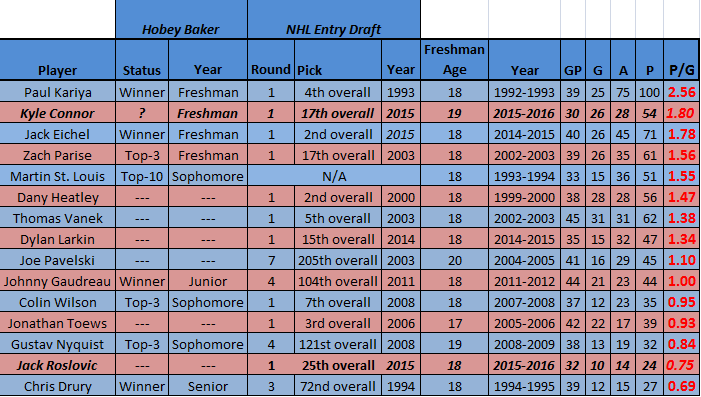 While no one is about to match the season that Paul Kariya had in the early 90’s, Kyle Connor is on pace for the second best freshman point total in the past 25 years. And while very few would suggest that he is as good a prospect as Jack Eichel (who some called the best prospect since Crosby who wasn’t named McDavid), Connor has already matched his goal total in 10 fewer games, and is on pace for more points. He is well clear of the pace set by current and former stars like Zach Parise, Martin St. Louis,  Dany Heatley, Thomas Vanek, and Johnny “hockey” Gaudreau. He’s also already passed the point total posted by Dylan Larkin, who also played at the University of Michigan last season, and is now leading the Detroit Red Wings in goals, (and is second in scoring) as a 19-year-old rookie. (Fun fact: Larkin is the first teenager to play full-time for the Red Wings since Jiri Fischer in 1999).

If the season ended today, most people who keep a close eye on the NCAA think that Connor would win the Hobey Baker. If he is awarded that honour, he’ll be only the third freshman player to do so in the past quarter century, again joining the likes of Paul Kariya and Jack Eichel.For those who want to get picky, there are two potential knocks on his season thus far. One is that Connor spent an extra year in the USHL, and unlike most other top prospects, he is a 19-year-old freshman, rather than 18. Still, the adjustment to playing in college, against young men who are 18-to-24 – is a far cry from the USHL, which is filled by teenagers between the age of 16 and 20. Also, one might also suggest that his linemates – Tyler Motte (Chicago prospect), and J.T Compher (Colorado) – might be creating his success. In all likelihood, it’s the other way around, as neither Motte nor Compher had great statistics in their first two seasons of college, or in the current season, until they were united on a line with Connor. (Connor has led the team in scoring virtually the entire season.)

The big question everyone is asking is whether Kyle Connor will turn pro this spring. He’ll turn 20 later this year, in December, and that is a normal age for top prospects to start their professional careers. If he does sign an NHL contract, will he play for the Jets, or will he get some time to develop his game with the Moose? I won’t speculate on whether or not he’ll sign, other than to say that if he does sign, he’ll follow the path of other recent Jets’ signings from the NCAA – Jacob Trouba in 2013, and Andrew Copp in 2015 – he won’t play in the AHL. The only thing we know with relative certainty is that the future is bright for this player, and whether he plays for the Jets in 2016, or 2017, his arrival is not far off.