The incredible odyssey of AllyK, the intrepid out of town fan who vowed to be at the 1st Winnipeg Jets game

This was no journey from Milan to Minsk, but the girl known as Ally K made a remarkable adventure to get to the Jets home opener.

If you have never heard of Allyk before it probably means you do not spend a lot of time on Jets discussion forums.  AllyK as she was known online, was the ‘inside source’ for Coyotes news.  She was a Coyotes season ticket holder who would often take pictures reflective of the crowd and post them online. 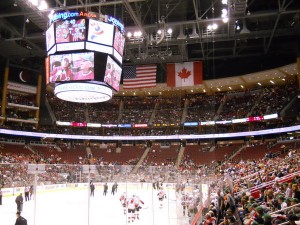 A little background on Ally is that she was born and raised in Detroit, Michigan and grew up a die-hard Red Wings fan.  Her formal training is as a nurse, and she eventually got a job in Phoenix, Arizona.  Being a hard core hockey fan, she signed up for Coyotes season tickets .  All went well for the first 41 home games but they happened to be squaring off against Detroit in the 1st round, and Ally reverted back to cheering for the team she grew up supporting.  Apparently this irked her season ticket holder neighbors.  These were people she has become friendly with throughout the season who turned on her and in some cases took it even further by spitting on her.

Not surprisingly this soured her on the Coyotes, although her love of hockey meant that she continued to maintain her Coyotes season tickets, but ensured that her Wings jersey stayed in the closest.

In addition to posting pictures on Jets forums, Ally also was a frequent commenter in the online chats held during the Illegal Curve Radio show.  She would join the conversation online and vowed about 18 months ago that if the NHL ever returned to Winnipeg she would be there.

Now when people make statements online, the vast majority of the time it is just that, words on a page not matched by actions.  Not Ally K.  When it was confirmed that the Jets were in fact returning, she booked her flight/hotel (from Dayton, Ohio as she had subsequently moved from Phoenix).  Think about this for a second!  She only knew people online and didn’t have a ticket but was committed to coming to Winnipeg to take part in the festivities.

So Ally K arrived in Winnipeg on Thursday, but it was not without incident.  First she was required to drive out of state to an airport in Kentucky to catch a plane to Toronto.  Her flight to Toronto was then delayed because of TSA labour issues.  She sat on the plane for awhile, eventually made it to Toronto only to miss her connecting flight to Winnipeg.  Luckily she got on a standby ticket and eventually landed in Winnipeg at 9:30 pm cst on October 7th.

She spent the next two days as a tourist, seeing the sights and getting a chance to explore the city she had read and talked so much about.  She even met up at the Tavern United Downtown with some of her former Return of the Jets forum members to share a drink with on Saturday night.

But all would be for naught if she came this far and did not get a chance to be inside the MTS Centre for the home opener.  So she awoke early on the day of the game, arrived at the MTS Centre and got in line at Ticketmaster.  This also gave her a chance to formally meet the Illegal Curve crew as we were broadcasting live from the atrium at the MTS Centre. 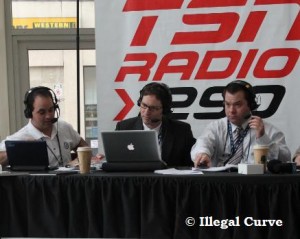 With the lineup at Ticketmaster not proving fruitful, Ally K joined us at Moxie’s inside the MTS Centre to share  some of her thoughts on Winnipeg with us.  She was surprised at Winnipeg’s size and loved how easy it was to get around in the city.

With it being 2 hours before game time and as the people on Portage were getting really excited we went outside to observe the partying.  As we stood around, friends would walk by, people I knew who were members of the Return of the Jets forum.  When I introduced Ally K, they were all extremely excited to meet her and take pictures with her. 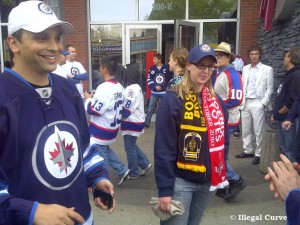 The best moment however was when we were standing around and a young brother/sister duo (I incorrectly assumed they were a couple but have been subsequently corrected by the brother) were walking past our spot.  The guy stopped, looked at Ally and said “are you Ally K?”.  When she acknowledged that she was, in fact, Ally K, he told her his online username and they spent 5 minutes chatting.  He recognized her simply from pictures online and happened to notice her as he walked past.

There was even a couple who knew her from the forums who called her with their story.  They were having babysitter issues which could have necessitated the wife leaving the game early.   Therefore they offered Ally the opportunity to attend the game for a period or two.

As the game drew closer and closer, while Ally K was still enjoying the atmosphere you could tell that the lack of a ticket was clearly weighing on her mind.  She was even making alternate plans in the event that she could not get in.  She had spoken to some other forum members who were heading to the Forks.  But she was not prepared to give up so easily.  She then returned to the Ticketmaster line and waited.  And waited….. 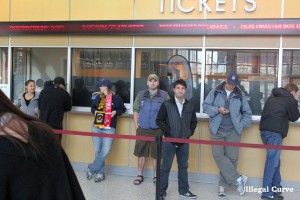 At 4:05 pm, True North released an additional 12-14 tickets, one of which went to the girl who deserved it more than anyone else.  Her odyssey took her from Phoenix to Dayton to Winnipeg and back but the girl known as Ally K left Winnipeg having kept the vow she had made to the Illegal Curve crew over 18 months earlier.  Ally K was in the building!! 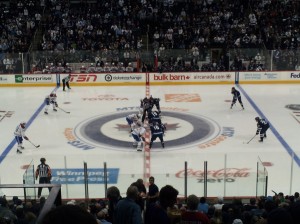 As a postscript, fans in Phoenix had best watch out as Ally K will be making her return to the Coyotes den for the team’s home opener against the Winnipeg Jets.  And she now has Winnipeg gear to wear.  But she should not be too concerned about retribution.  It sounds like there will be a sizable contingent of Winnipeg Jets fans invading the Jobing.com arena to keep her company.

One additional note to the AllyK story.  As she made the long return back to Ohio on Monday morning, check out who she was flying to Toronto with.  Nice ‘cherry’ on top to complete the ultimate hockey weekend. 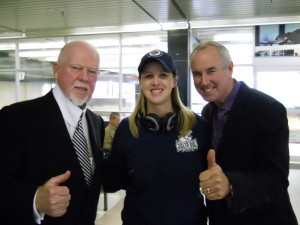