By now you have probably met these two cousins from sunny California who went on the ride of their lives here in Winnipeg. We catch up with them to hear their post-game reflections.

As many of you know, Bryan Lynch and his cousin Mike Peterson have gained some quasi celeb status in their brief journey to Winnipeg to see the Sharks play the Jets.  I had the opportunity to meet the guys as well as their generous benefactor Brad (aka ps241 on HF) who made this trip so much better for the guys, during the 1st intermission and the smiles on their faces were ear to ear.  The fact that the Sharks won 2-0 probably helped make this a night the guys will remember for the rest of their lives.

We had a chance to get their final thoughts in this Q & A about the game, the crowd and the people of Manitoba.

Q.  What was your day like leading up to the game?

A.  The day was insane.  Nothing like we could have imagined.  One of the HFBoards members, Brent, picked us up and took us to the Kings Head pub.  We had a radio interview with Larry Updike followed by a TV interview at the hotel.  We had a lot of fun with it, but it’s definitely not something that we’re used to.  There were snow angels involved, but that’s all I can say 🙂 We got to see a bit more of Winnipeg and to enjoy some of your great beers.  Before the game, we met up with a bunch of great boys from HFBoards.com over at the Tavern at MTS Centre. We couldn’t have hand picked a nicer bunch of guys to hang out with.  That was followed up by meeting up with the news crew again to film us walking in to MTS Centre and heading to our seats.  That was a little odd for us too, but it makes for a fun story later. 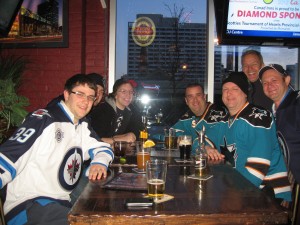 Q.  What were your initial impressions of the MTS Centre?  The Crowd?  Etc.

A.  Our initial impression was that we couldn’t believe a minor league hockey team played in such a nice facility.  It’s obvious to an outsider that this place was built to host the NHL from the beginning which is great.  The crowd was great.  We were surprised to see a few other Sharks jerseys sitting around us.  It was interesting to hear how some fans had adopted other teams in the absence of the NHL locally.  Most people were great to us and I think we got our fair share of good natured ribbing.  During our last interview at the end of the second period, a Jets fan pulled my toque down over my eyes, but I’m sure he did it with love.  Due to the Jets not scoring, we didn’t get a chance to hear too much of the famous loud building.  The times when the crowd was together though, we could tell that this place was capable of some serious volume!  It’s a little smaller than the Shark Tank (17,562) and the levels look a bit steeper due to squeezing an entire venue on to one city block! 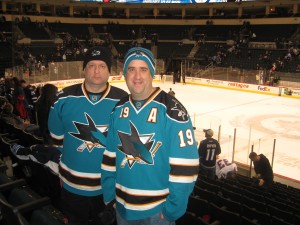 Q.  What were your thoughts on the game?

A.  First off, I have to be happy that our boys took home two points tonight.  We do wish that it was more of a harder-fought closer contest.  My dream was that the Sharks would win it 4-3 in a shootout or something.  Our Sharks looked pretty decent and I thought maybe the Jets came off a little flat.  Is it due to their road trip?  I’m not sure.  You’ve got a handful of key players out injured and I think you could have used them last night.  I do have to say when Pavelec made that diving stick save on our guys, my mouth was hanging open.  Just a beautiful clutch save.  I think in maybe 2-4 years, we’ll have a chance of playing each other in the playoffs, which would be AWESOME.

Q.   How does this experience rank against the other cities you guys have traveled to?  Difference between here and other places?

A.  This ranks near or at the top for different reasons.  Last year will always be a special memory for us because we got to see two Canadian hockey teams in two days.  Calgary and Edmonton.  It was our first time to Canada (I was in Prince Rupert, BC a few years ago as a cruise ship stop, but that didn’t count) and our first time checking some Canadian teams off of our hockey bucket list.  We also got to meet the Sharks after the game in Calgary.  So that was special because it was a sort of first for us.  This trip is tied right at the top I think with last years’ adventure.  The fans here have made the difference.  Just being welcomed like long lost family, meeting the Sharks again and all of the crazy media stuff we fell in to has made this something we’ll never forget.  The energy here is just phenomenal.  Talking to nearly anyone is great.  It was so cool that everyone here treats a hockey game like some huge event.  Everyone is excited, ticket or not.  The biggest difference for me though was the weather.  Last year I thought it was pretty cold in Edmonton.  I was wrong!  I live 30 minutes from the ocean in Hollister, CA so it was a novelty treat for me.  My Cousin loved it…although he seems to be fine with no warm clothes on while I’m bundled up like a Randy from “A Christmas Story” getting sent off to school.

Q.  How does it feel that your journey became quite the story across the city?

A.  We were really surprised.  We ran in to 3 or 4 other Sharks fans that had flown in for the game and they weren’t getting the same craziness that we were. It feels good to know that your community cares that much about a couple of fans from the states and how your local crowd interacts with them.  It just reinforces the reputation of Canadians being a genuinely warm and caring people. 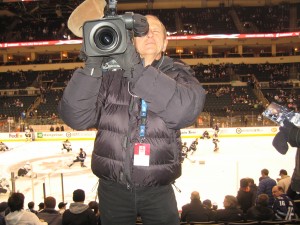 Q.  What is your best Winnipeg memory?

A.  There are a lot of insanely great memories.  From making snow angels with the CBC reporter in front of the Inn at the Forks to just hanging out with the boys after the game.  These are memories that I will hold close to my heart until the day I die.  It’s impossible to pick just one.

Q.  What are your final thoughts?  Do you want to say anything to the people of Winnipeg?

A.  In just a few short days, we’ve come to love your town and your people.  I said this before, but it feels like we’ve finally come home to the place where we belong.  You all have a lot to be proud of. If I could communicate anything to someone wondering what it’s like to have hockey back in Winnipeg, it would be that the energy and enthusiasm here is intoxicating.  Even if we didn’t happen to be given game tickets, rides, food and beer, this would still be up at the top of my list of favorite NHL venues to date.  The Jets are right back where they belong at home.  I’ll be happy to get home to my wife and two baby boys, but I’ll be sad to go.  Thanks for the great trip Winnipeg!!!

A big thank you should go out to Brad for exemplifying the generosity of Manitobans.