Tanner Glass: Fighting Still Has a Place in the Game

In my previous article “Who Will Drop the Gloves For the Winnipeg Jets” I looked at last seasons’ and career fighting numbers for Jets players to see who we can expect to be dropping the gloves for the team this season.

With 33 fights in 184 games, Tanner Glass leads the team in percentage of games played, with a fight. His ten fights last season would have lead this years team.

On the Illegal Curve Hockey Show, we have had many debates about the place fighting has in the game. In the episode linked above, Ezra and Richard get into a nice argument with Winnipeg Free Press Columnist Gary Lawless about fighting. 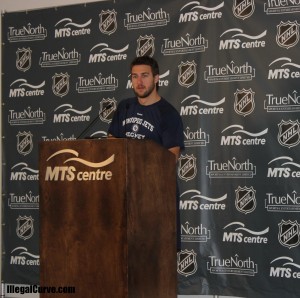 While there may be a division of opinion among fans, Tanner Glass thinks that dropping the gloves is still a part of the game.

“I think its definitely a part of the game, I think most guys would say that. It’s not necessarily used as much to police the game as it used to be. I’d like to see it used more (to police the game). The instigator rule really changed the way fighting is used (by the players). It still plays into effect when (the opposition) run a good player, or a dirty play happens; (the opposition) know, if you have a guy on your team who’s willing to stand up for his teammates (they will have to pay the price for their actions).”

As a player who is known for his energy and grit on the ice, Glass believes that the days of the 4th liner who spends more time in the box than on the ice, are over.

“I think the days of the big heavyweight enforcer are a little bit dated now; the average player won’t fight that guy anyways, he won’t be able to jump him. But if a guy of average size who can still play, is like “hey we gotta go”, guys will have a lot harder time turning that one down.”

While the off season has been dominated by the talk of concussions, mainly Superstar Sidney Crosby’s; the Regina, SK native doesn’t think that it will deter anyone from fighting

“I don’t think so; guys do get concussions from fighting, but I think its more that hit where you don’t see that guy coming, or you don’t know where you’re going to get hit, that’s more dangerous. When two guys are going and they know what they’re doing, I don’t think its very dangerous at all.”

While Winnipeg isn’t in the Stanley Cup Final quite yet, the fans are sure acting like it. The fan response reminded Glass of the playoff run in Vancouver last spring (& early summer). 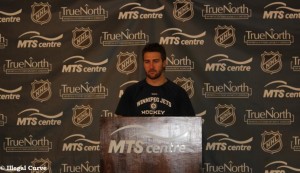 “That’s one of the things I thought of right away. The energy levels sustained here through the start of the season from what I had at the end of last season. It’s a little different, expectations were pretty high in Vancouver last year, and everyone was like “this is our year to win it.” Being different is not necessarily bad, it’s been really good here, people are excited, a lot of little kids and happy faces around the rink at all times. The energy is different, but it’s a great energy.”

Tanner Glass was one of Winnipeg’s first free agent acquisitions. He signed here because of his familiarity with the organization, and proximity to home. Glass appears eager to play for a franchise with such excitement around it, we look forward to seeing what he can bring to the Jets this season.

Listen to the audio of his press conference here