Globe and Mail:  Bruins and Blackhawks battered after a ‘very long short year’.

Chicago Sun-Times:  Victory parade will likely be Thursday or Friday.

Winnipeg Free Press:  Chevy’s focus is inking RFAs.  We keep hearing about little chit chats between the Jets and the agents but fans are anxious to hear that the big 3 have had their services secured.

Winnipeg Free Press:  Look to the left.  Ed Tait continues to look at the Jets roster and where they could use some improvement.

Winnipeg Free Press:  Jets extend Noel’s contract.  The lame duck title has now been removed as one of the first things Chevy did in his presser was to announce that coach Noel had his contract extended another year.  This will likely make the majority of IC readers happy as in our recent IC poll, most of you wanted to either extend him or maintain the status quo.

Winnipeg Sun:  GM not in market to trade Byfuglien.  There were rumours about Buffs weight recently which in turn fueled speculation about his trade potential.  Chevy says he isn’t in the market to trade the big defenceman but who knows what is happening behind the scenes. 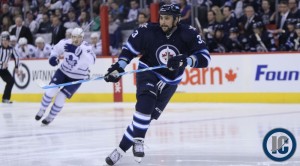 Winnipeg Sun:  GM willing to listen to draft-day deals but only if it’s worth his while.  As is the attitude of the other 29 GMs from across the league I’m sure.

Illegal Curve:  GM Kevin Cheveldayoff pre-draft press conference.  If you missed the presser we have all the audio on site. For those unable to listen while at work, there are some of the more interesting comments that we tweeted during the presser.