Hear from the newest alternate captains for the Jets. 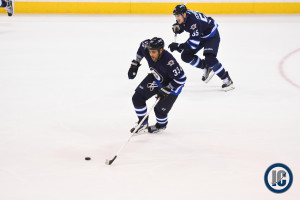 Hear from the newly named alternate captains for the Winnipeg Jets.

Byfuglien on wearing an A: “It’s always an honor when you get a letter on your jersey. Shows that you’re doing something right.”

Scheifele on wearing an A: “It’s a huge honour to have a letter on your jersey. Hopefully means good things ahead for me and the team.”

Byfuglien follow-up: “You don’t need a letter on your jersey to be a leader in the room.”

Byfuglien on Wheeler being named captain: “I’m so happy that he got that. Now he can just play hockey and lead Winnipeg to better things.”

Scheifele on Wheeler being named captain: “A guy who eats, sleeps and breathes all things Winnipeg Jets.”

Byfuglien on what kind of style leader works for the Jets: “All Blake has to do is set a good example for the young kids.”

Scheifele on being a connection between young players and the veteran core: “Can be intimidating as a young guy to talk to Buff, Wheels.”

Byfuglien on his summer: “Super excited to go play in World Cup for USA. Have never had this opportunity before.”

Byfuglien on looking forward to the upcoming season: “I’m excited to see what these young kids have.”

Byfuglien on having fun on the ice: “‘I’m out there to enjoy. Work hard. But I want to win.”