Sami Niku back in a regular uniform for Manitoba Moose practice

The fleet-skating defenceman back in a regular jersey for practice. 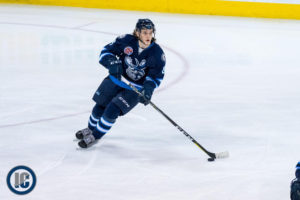 Sami Niku has been a missing piece from the lineup since November 27th when a 2nd period hit in Milwaukee knocked him from the game.  It was originally thought he would be a game-time decision during that road trip but once they got him back to Winnipeg and checked out by team doctors and we were told on December 6th that he was week-to-week.

Almost three weeks later and with the Moose back to practice today following their holiday break the fleet-skating Finnish D man is back in a regular jersey according to play-by-play voice Daniel Fink.

That is good news for the Moose, possibly the Jets and mostly Sami Niku who has to be frustrated with how the 2019-20 season has gone to date.

In addition to Niku veteran forward (and Brandonite) Ryan White is also back in a regular jersey.  He has been out of the lineup since November 2nd.

And Kristian Vesalainen, who left the game last Sunday in the 1st and 2nd periods and who didn’t play in the 3rd period was in a regular uniform as well today.

Following practice coach Vincent added this about Luke Green and Peter Stoykewych “We’re talking about weeks. It’s longer periods. I don’t have a time frame but we don’t know how long.”.

Manitoba hosts division rival Rockford for a pair of games starting with a Sunday matinee.