Luke Green is a 3rd round pick (79th overall) of the Jets from the 2016 NHL draft in Buffalo.  Last season he played 60 games with the QMJHL’s Saint John Sea Dogs and Sherbrooke Phoenix before joining the Manitoba Moose on an amateur tryout offer.  He played four games for the Jets AHL club registering one assist. 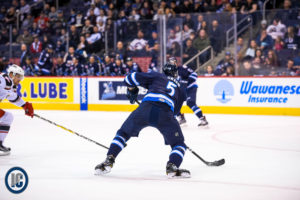 Green joined the Jets prospects at the Young Stars tournament in Penticton, British Columbia earlier this month and suffered an upper body injury in the final game against the Calgary Flames prospects on Monday, September 11th according to Ken Wiebe of the Winnipeg Sun.  He was listed as injured prior to the start of Jets training camp by the team.

On day one of Jets training camp bench boss Paul Maurice was asked about the two injured players (Green & Kostalek) and the coach acknowledged Ken Wiebe’s statement about Green’s injury (1:06 mark of scrum), specifically that it was an upper-body injury sustained at Young Stars.  He then confirmed that the injury to Kostalek was “upper-body as well, he (Kostalek) is in quite a bit shorter term than Green is..” giving an indication that it could be lengthy for Green.

On September 15th Jerome Gaudreau of la Tribune wrote about the injury (in French, which the official Sherbrooke Phoenix team account retweeted) indicating it was related to Green’s shoulder and would cost the prospect four to five months.  On Wednesday (September 20th) the GM of Green’s junior team and former NHL goalie Jocelyn Thibault told Wily Pavlov of Herald Sports that Green had “dislocated his shoulder” and could be out “close to 20 weeks”.

Tough injury for the prospect to sustain just as the season is set to kick off.

For all the latest Winnipeg Jets and Manitoba Moose news be sure to keep it locked to illegalcurve.com.