It was announced Saturday that the “T” in the GST line will be out for three weeks with a lower body injury. Thorburn had suited up for 68 of the Jets 69 games playing an average of 10:16 minutes per night recording ten points on four goals and six assist. His most recent goal against Buffalo’s Ryan Miller was one of the top goals of the year for the Jets.

Thorburn’s injury was discussed by Drew, Richard and Ezra on Saturday’s Illegal Curve Hockey Show. The following quotes have been transcribed and paraphrased from the latest episode (available in its entirety). Subscribe on iTunes and have the podcast automatically sent to you as soon as it becomes available. 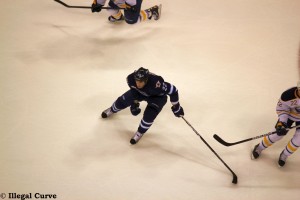 “It took him 50 games to get his first goal, he’s got four now. He’s a good physical player, he stands up for his teammates. Tanner Glass, Jim Slater and Chris Thorburn, while they don’t get a lot of goals, they’ve really gelled as a line. They do play well as a unit, there is a chemistry element there, when they’ve thrown Miettinen on with them in the past, it just hasn’t done much.”

Even though the “MSG” line, hasn’t worked in the past, Richard Pollock was quick to say that Miettinen would be the easiest fit into the third line right wing spot, as he is currently the fourth line right winger.

Pollock went on to go over other potential replacements

“I don’t think Eric Fehr fits on that line. He wasn’t performing at a level that warranted being put in the lineup. If you call somebody up now, and I think you should, will Mahachek come in because he’s a right winger? Gagnon is a centre, but you might want to bring him up.”

While the GST line is a fan favourite, it has been debated numerous times on the Illegal Curve Hockey Show that on a top NHL team, they would receive fourth line instead of third line minutes. This week was no different.

As it was put bluntly on Saturday’s show.

“As an organization, if you want to compete with the top teams, you can’t be throwing out a line, ten to fifteen minutes a game that has a top scorer on it of fifteen points. That is a fact. All three players bring good qualities and they can be a solid fourth line.

They take a lot of draws in their own zone, Slater is  very good at face offs, they kill penalties, they forecheck well, play a responsible defensive game, and play against the opponent’s best players. In addition they’re good in the room, and they stick up for their teammates, those are qualities that shouldn’t go unnoticed.

But at the same time when you have a line out there that can’t muster anything in the way of offense, you’re going to run into problems winning on a nightly basis. If you’re down 3-0 and they are one of the three lines you are rolling out there in a situation where you are trying to get back in a game, that can’t be one of the three lines you are throwing out there all the time. Give Cheveldayoff and company time to assemble a complete roster.”

Expect that type of analysis each week on the Illegal Curve Hockey Show, Saturday’s from Noon to 3pm on TSN 1290. Subscribe to the podcast on iTunes and have it sent to you automatically as it becomes available.