Yesterday on the Illegal Curve Hockey Show we had Andrew Gross (Twitter: @AGrossRecord) of The Bergen Record on to talk about the latest news regarding the New York Rangers. For more of Andrew’s writings about the Rangers, you can see his blog Ranger Rants. 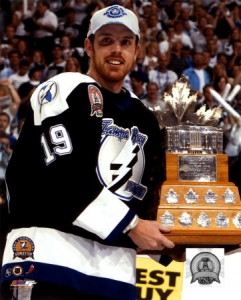 Here is some of the insight Andrew was able to give us on the Rangers.

Andrew on Brad Richards’ decision to come to New York:

“He talked a lot about wanting to come back East when it was said and done. He talked a lot on his conference call about his grandfather who lives in PEI and stays up and watches the game, and talks about how tough the games out West were on his grandfather. The fact that his parents were able to fly out to New York When he was introduced the other week…All those little things just added up for Brad.

Read more quotes from Andrew Gross after the jump.

“You can’t over emphasize the previous relationship with John Tortorella. It turns out, since John Tortorella was hired here in Feb ’09, he’s been talking Glen Sathers’ ear off on what a perfect fit Brad Richards would be. Glen was not all that familiar with Brad Richards the person, they hadn’t interacted prior to these negotiations. Glen said because of Torts talking about Brad all the time, he felt like he knew this guy already. That was a huge factor as well”

On the contract situation of Ryan Callahan and Brandon Dubinsky

“They have arbitration dates, they’d like to get it done before arbitration, I still think it will get done. Dubinsky was in New York today; the Rangers are running a summer youth hockey camp, Dubinsky was the guest today, he said some very flattering things about the Rangers organization. There doesn’t seem to be any animosity certainly on Dubinsky’s part, that he went through two years ago when he was a training camp holdout. Setting up these arbitration hearings guarantees one way or another that these players will be in camp, this is going to e settled by the end of the month, it’s just reaching a fair number.”

“Cali and Dubi are reaching between $4 and $4.5 million, and that’s fair market value. It’s a matter of Glen and his team of capologists, making sure they can fit everything together. From everything I’ve been told, they haven’t settled on a price, there’s no animosity, things are progressing.

The next episode of the Illegal Curve Hockey Show will air LIVE on Sports Radio 1290 in Winnipeg, Manitoba, Canada on Monday July 18, 2011 from 6pm-8pm CST.