Q & A with Chicago Steel Prospect Alex Rigsby: First Woman ever drafted in the USHL

As IC reported back on May 13th, Alex Rigsby became the first woman ever to be drafted in the USHL, when she was selected in the 16th round, 199th overall by the Chicago Steel of the USHL.  (The Steel also drafted Jake Chelios, son of Red Wings defeceman Chris Chelios in the 4th round, 49th overall and David Bondra, son of sniper Peter Bondra in the 7th round, 82nd overall).  She has played the previous two seasons with the Milwaukee Admirals Midget Minor boys team.  She has also won a gold medal at the U18’s in Germany.

Alex was nice enough to take some time out of her very busy schedule (she is finishing school early so she can prepare for the USHL camp of the Steel) to answer some questions for Illegal Curve.

David:  How did you get into hockey?
Alex:  When we moved from California to Wisconsin, my older brother made an agreement with my parents that if we moved, then he would get to play hockey. So then I said if he gets to play hockey then I want to play too.

David:  How would you describe your style?
Alex:  I am very athletic and have quick movements. I put a lot of emphasis and focus on skating and I find ways to make myself bigger through my stance. Also, I make sure I have good positioning and think of every situation as a game situation. 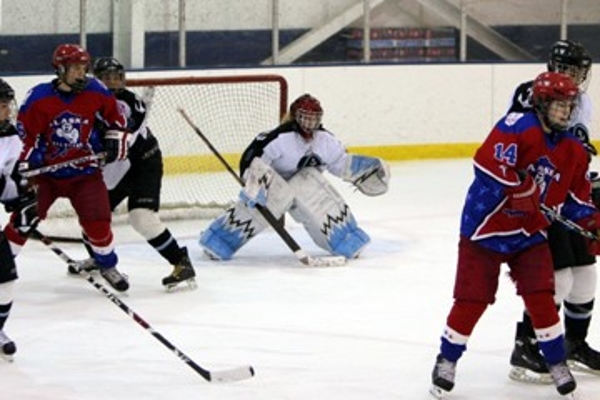 David:  Have you encountered any negative reactions/stereotypes?
Alex:  I’ve been very lucky with the teams that I have been on. My teammates and coaches have always been more than positive and have always treated me just like any other member of the team. Of course I’ve read some of the blogs that call me a publicity stunt and stuff, but that doesn’t phase me.

David:  What sort of trash talk are you subjected to?
Alex:  Honestly, its hockey, of course there’s trash talk. But again, it doesn’t get to me, in one ear and out the other.

David:  You were the first ever female to be drafted in the USHL, what does that mean to you?
Alex:  I’m honored to be recognized like that. I think it’s a testament to how far women’s hockey has come. There are many other talented girls out there that hopefully will be able to showcase their talent someday too.

David:  Are you excited for Steel camp? What are your expectations?
Alex:  I am very excited for the camp. This will be a great opportunity for me and I look forward to competing vs. the top guys in the country at the camp.

David:  You’ve apparently committed to the University of Wisconsin, what drew you to that school?
Alex:  Wisconsin has so much to offer their students and athletes and it had everything I was looking for, not only in athletics, but academically as well. The athletic facilities are unbelievable and the coaching staff is great. I got a chance to play with Coach Johnson while on the U18 Worlds team and he made it such a great experience. I am very excited to play for Wisconsin.

David: You won a gold medal at the World Under-18 Championship. The US Women are a powerhouse on the Olympic stage, how important is it to you to possibly play on that stage?
Alex:  The experience I had over in Germany at the World U18 Championships was amazing and by going to the camps I have played with some of the previous Olympians and the national team members. It makes me want to work that much harder to someday represent my country at the Olympics.

David:  I’ve read that you want to play in an NHL game like Manon Rheaume, is that true and if so, what do you need to do to get yourself to that point?
Alex:  It would be amazing to play in an NHL game like Manon, but I also realize that the NHL goalies have an unbelievable amount of talent. As fun as it is for anyone to dream to play in the NHL, right now I am focused on the present and what I need to do to continue to improve.

David:  What are your hockey goals? If you could envision the next 5-10 years what would they look like?
Alex:  My ultimate goal since I started playing hockey is to one day play in the Olympics. So, I am going to continue working as hard as I can to someday reach that goal.

I’d just like to again thank Alex for taking time out to answer our questions and I have no doubt that we will be seeing her competing with the Badgers for a Frozen Four in the near future and in a US Olympic jersey helping her country compete for hockey supremacy.