Have the wheels fallen off already? Not yet, but our prospects expert Kyle Koisor takes a look at the Jets 2012 draft possibilities.

With the current NHL season 8 games old and the Jets sitting with a 2-5-1 record (5 points), it looks as though the Jets would have a ceiling this year of being a bubble team and a floor somewhere in lottery territory.

Projecting the current start over a full season, the Jets are likely to end up somewhere in the 70-75 point range (factoring in a hot streak or two), given their seemingly inconsistent play. With that in mind, I thought it might be worthwhile to look forward to this upcoming June to see just whom the Jets might call to the podium on draft day.

If the Jets settle down and find their legs (as I feel they will), I would imagine they end up drafting somewhere between 6th and 12th, just out of lottery range but well within the meat of this talent-laden draft.

To come up with a consensus list of who might be available in that range, I took a look at 5 different 2012 rankings and chose the seven (actually eight due to a tie) players whose names came up most often. Sources included: Craig Button’s TSN list, Coppernblue’s consensus list, The Scouting Report, MyNHLdraft.com and Bob Mckenzie’s list. 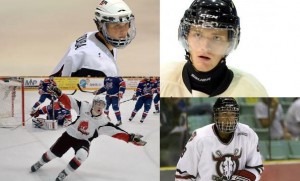 The list of potential Jets looks as follows (In no particular order, with links to The Scouting Report bios):

Now keep in mind that the 2012 draft list is still pretty fluid (Forsberg and Grigorenko have both been in the Top 3, Alex Galchenyuk’s injury may cause him to fall, etc.). That said, it is most likely that a good number of the above-mentioned players will be available where and when the Jets draft.

My personal preference (depending on the Jets’ selection number and who is available) would be to take one of three defenders; Trouba, Reinhart or Dumba. Reinhart, if available, has the best potential of the three given the tools he is working with and his size (6’4). If he can develop into a top pairing guy for the Jets, they will have established an excellent core to build around in the coming years.

My second choice would be Jacob Trouba. Said to be a very calming influence on the blue line, he likely doesn’t have the same upside as Reinhart, but would not be out of place in the top 4 going forward. Headed to the University of Michigan, selecting Trouba would give the Jets the luxury of having him gain valuable developmental time under coach Red Berenson in Ann Arbor.

Finally, Matt Dumba would be an excellent addition in the agitator category. I had the chance to speak to his former coach from Edge Prep, and he mentioned things very similar to his Scouting Report biography, big hitter and excellent leadership qualities.

Three defensemen with different qualities, but I believe all could make a contribution to the Jets. Now if the wheels come right off and the Jets get a ticket to the Nail Yakupov sweepstakes, all bets are off.

Please take a look at the biographies and leave your thoughts in the comments, or hit me up on Twitter @ickylek.