The Cycle Line, The Speed Line, The Russian Line and The Checking Line are the four lines that should be in place for next season.

Free Agency weekend was quite eventful for Jets fans. With the signings of Olli Jokinen and Alexei Ponikarovsky, combined with the departure of Tanner Glass, the Jets forward corps will have a different look next season. 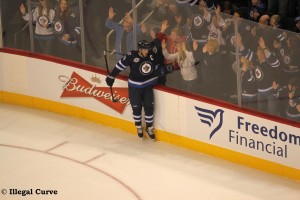 After giving some thought to potential line combinations, here’s what Coach Noel might do to start the season. Each line has a defined role and some inherent chemistry.

Andrew Ladd and Olli Jokinen are the shooters; the guys who can use their big bodies in the gritty areas to work the puck deep in the offensive zone. Spencer Machacek excelled last season on the third line, playing with former All-Star Jokinen and Captain Ladd should give the youngster a boost in what should be his first full NHL season.

The strength of this line is speed; Evaner Kane may be one of the fastest players in the league, Blake Wheeler has exceptional speed for any player, let alone someone who stands at 6’5” and Bryan Little is better suited here in a second line role. Blake Wheeler was a passing machine last year, if he is feeding Kane all season, 40 goals will be within reach. (*Assuming the Jets are able to sign RFA Evander Kane)

“The Russian Dolls”, 2 Alex’s 1 Nik, call them what you want, but this is what should be the Jets 3rd line. Hailing from Kazakstan, Russia and the Ukraine, each of these players were born in the former Soviet Union. The newly reunited Antropov and Ponikarovsky are a natural choice to be line mates. CBC’s Andi Petrillo says they were “attached at the hip” during their days in Toronto and St. John’s from 2000-2009. Here’s hoping they can rediscover that chemistry while helping twenty-year-old Alex Burmistrov develop his game.

Patrice Cormier is a perfect fit to replace Tanner Glass. He’ll play at the wing, but can move to centre where he posted a 22-8 record in faceoffs last season. These guys get the puck deep, apply pressure through the forecheck and provide steady defensive zone coverage on the penalty kill. This line can skate and shut down the opposition’s top line, while also sticking up for their teammates. Chris Thorburn’s eleven fights last season lead the team while Slater and Cormier aren’t afraid to get in the dirty areas. While they won’t be the GST, Patrice Cormier brings the extra 2% that will have fans chanting PST.

In this lineup configuration, Antti Miettinen is a healthy scratch.

Agree? Disagree? Have your own line ideas, post in the comments.