I don’t have to tell those of you reading this that tonight is Game 7 of the Stanley Cup Final.  The last game of the season; meaning, there is lots of time to rest after tonight’s game.  Therefore, I think tonight is the perfect spot for Dan Bylsma to give Sidney Crosby at least 25 minutes of ice-time.

Let’s look at Crosby’s ice-time through the first six games of this series:

First off, I’ll be honest and say that I really don’t think Crosby has played enough so far in the Final.  I mean, Vincent Lecavalier and Martin St. Louis were playing 25 minutes a game last year during the regular season, so it is not as if Crosby cannot handle the extra ice-time.  He is a supreme player, who is by all accounts in supreme physical condition.

With everything on the line, I believe that Crosby and Malkin should be on the ice almost every other shift.  Also, putting the two of them together more often tonight would hurt Detroit’s depth advantage (Especially considering the way Jordan Staal’s line played on Tuesday).  Mike Babcock is going to want Zetterberg against Crosby, so if Crosby and Malkin are logging big minutes, both separate and apart, Detroit will be attempting to match lines and it would come at the cost of their depth players–and Detroit’s depth players are superior to Pittsburgh’s.

Another argument for loading up Crosby and Malkin together has been the play of Brian Rafalski.  The small, smooth-skating defender has been getting beat one-on-one more than people have been talking about, so loading up two superstars on one line would give Nicklas Lidstrom fits. 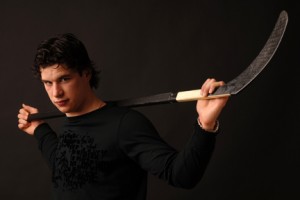 I guess all I am wondering is, with only one game left in the season, would you want Sidney Crosby on your bench with something left in the tank?

NHL Playoff Morning Papers (Friday Edition): Game 7 is the difference between never and forever, reaction to Marc Crawford hiring and Heatley would be perfect fit for Oilers
On the Beat: Phil Kessel still unsigned and Alexei Kovalev wants Dany Heatley to stay