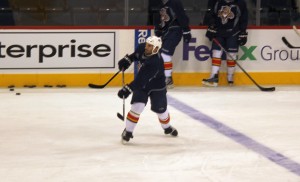 Jason Garrison is off to quite the start for the Florida Panthers. Fourteen games into his third NHL season, the undrafted college free agent has already tied last year’s goal total. His five goals are the second most by NHL defenseman and tie him with three others for the team lead. The twenty six year old has seen an increase in icetime, playing in all situations, and has excelled thus far.

The Winnipeg Jets experienced it first hand in their last matchup, and his reputation is growing as a player with a howitzer. Garrison says it’s something he’s always had:

“Yeah, definitely growing up I’ve always had a hard shot. It’s (been) a little bit more fortunate this year that I’ve been able to use it a bit more, I’m just finding the way to the net.”

To him, a good slap shot, is about finding the balance between power and accuracy

In the pre-game skate, the Panthers defenseman gave the boards a thorough examination. They fired multiple pucks at them to test how much the it was able to rebound. Garrison says its common practice for the Panthers to give them a look-over before a game.

“The boards are lively for sure in certain areas, it’s something you want to come into an unfamiliar place and see how the boards play. They are bouncy in some areas for sure.”

“Every pre game skate you want to check what the boards do, it could help a team a lot knowing what happens. You kind of shoot pucks around and see what happens.”

Teams are looking for every advantage in order to score goals, Garrison and the Panthers defenseman were practicing some nifty trick plays that could catch the Jets off guard tonight.

One popular maneuver by teams these days is for the point defenseman to bank the puck off the end boards, and the puck bounces to the man in the slot for a scoring chance.

Teams also use variations of this play by having the defenseman bank the puck behind the net, which bounces to a player to the opposite side of the goalie for a chance.

I’d be curious to see if they try these against the Jets tonight.

Puck drops at 7:30pm at the MTS Centre