Pain and Loss of Losing a Franchise

With the NHL Conference Semifinals in full swing we should be focussing on the intense battle between Sid the Kid and Alex the Great but instead we are drawn to the three ring circus which is surrounding the Phoenix Coyotes.

Now a significant amount of material has been written about this issue in the past 48 hours.  We have heard a variety of reports and the chronology of events began with a major announcement stating that Canadian Billionaire Jim Balsillie made an offer to buy the Coyotes and move them to Southern Ontario, which was countered by a statement from Deputy Commissioner Bill Daly and then we were informed that Jerry Reinsdorf was close to purchasing the Coyotes, at which time NHL commissioner Gary Bettman chimes in that he was skeptical that Balsillie’s offer would be accepted, then finally the CBC tells us that they would be happy to have a 7th Canadian team and finally last evening concluded with the IC Radio Show where Rich and Drew discussed the situation with bankruptcy attorney Richard Farroh.

Wow.  And to think that all most fans wanted to do last night was enjoy the Penguins/Capitals and Bruins/Hurricanes Game 3’s.

Unfortunately these events seemed remarkably similar to a painful time from years past.  Picture it, Sicily 1912, oh wait, sorry I meant the year was 1995 and the Save the Jets campaign was in full swing.  I remember being part of the “Sea of White” as we shut down Portage and Main in our youthful exuberance thinking that a grassroots effort could somehow stem the tide and help to keep the Jets in Winnipeg.  The campaign continued onto the Forks where we were regaled by the singing of Jennifer Hanson (who usually sang the national anthem at the Winnipeg Arena) and the dancing styles of Dancing Gabe. 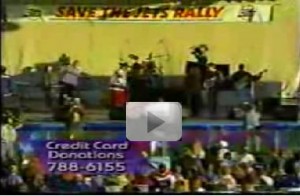 Of course, as everyone knows, the Jets left Winnipeg for the desert and the bitterness set in.  The city of Winnipeg received the IHL’s Minnesota Moose (Notable for being featured in Disney’s Mighty Ducks movie) which were renamed the Manitoba Moose as some sort of consolation prize and we lost an integral part of the city’s sports identity.  (Editor’s Note: The Moose skated to a 3-2 victory last night which ensured a sweep of the Grand Rapids Griffon’s putting themselves into the 3rd round and they are Winnipeg’s best chance at a hockey championship since the halcyon days of the WHA’s Winnipeg Jets back in the late 70’s).

But the concept that we had now become a farm team city left many bitter and as most people do when grieving you go through various stages, one of which is anger.  I must admit that I took a certain amount of glee year after year as I watched the Coyotes continue the Jets playoff futility.  In fact the one truth that I clung to (and even to a certain extent a small part of me still clings to) was the fact that the Coyotes have never won the Stanley Cup despite Eddie O’s promise to “bring it back to Winnipeg” if the Coyotes ever won the Cup.  (Happens at 9:35 of the video below). 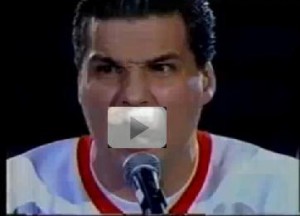 If you look at the other franchises that moved around that time, everyone has won the Stanley Cup (Minnesota North Stars left in 1993 and Dallas won in 1999, Quebec Nordiques left in 1995 and the Colorado Avalanche won in 1996 and 2001, Hartford Whalers left in 1997 and the Carolina Hurricanes won in 2006).  In fact if you go back to 1967, every team that has been relocated has won a Stanley Cup (Atlanta Flames left in 1980 to become the Calgary Flames who won in 1989 and when the Rockies left Colorado in 1982 to became the New Jersey Devils the folks in Denver had to deal with a team that went on to win in 1995, 2000 and 2003).

Eventually though I became a bit more pragmatic and realized that I stood to gain nothing by hating the Coyotes.  It isn’t the City of Phoenix’s fault that the Jets left so why should we wish them ill?  Do I think hockey in the desert is a great idea, not really, but I can empathize with Coyotes fans who don’t want to lose their team.

As I stated earlier it is somewhat eerie the parallels between what went on in Winnipeg back in 1995 and what is happening today in Phoenix.

From Five for Howling:

So What do we do now? We show our support for our team in any possible way we can:

Post here! –  Come by this blog and post a FanPost or FanShot about how you feel about hockey, and the Coyotes. We become a harder target when others know we’re out there. Or just drop in some comments if you don’t have a lot to say. But say something! Anything! Let the world know we’re here.

Heck, Start your own blog! – Yeah, they’re saying that this could be resolved in 8 weeks, but you’d have a lot to talk about for those weeks wouldn’t you?

Wear your Coyotes gear around town – We’ve got naysayers in our own city. Show your pride in our NHL team and make sure people know you’re not just a hockey fan, but a COYOTE fan.

Get Involved! – Over the next few days you’ll start seeing websites to counter some of the ones already in motion in Canada. Stop by and join them. I’m also in talks with people that want to start rallies, protests, or whatever you want to call it to show that we want this team here. If nothing else we can get more attention payed to this issue and that there are real, knowledgeable fans here in the Valley. We’re not all transplants, or people that go when our “A team” is in town. We’re always here.

Defend Yourself! – There are times to stand on the sidelines and wait for an opportunity for reasoned, rational debate. Quite frankly, we don’t have the time for that. Pick up your keyboard, your telephone, you telegraph, whatever and fight back! Tell people that we’re mad as hell and we’re not going to take it anymore! Call the Coyotes’ front office. See if there’s anyone there that will talk. They talk to me and I’m just a small time blogger. Call the paper, call the radio shows. Don’t let the bashers be the only voice.

Take time and breathe – This isn’t easy. That’s why I didn’t respond until I could pull myself together. This is a trying time to be a Coyotes fan. A great many of the fans here are of the Uberdedicated variety. You’ll do everything and be everywhere. But take a break. Turn off the playoffs. Get away from the news and take a break every now and then. You can only take so much punishment at once. Fight hard, but know when to take a rest.

I don’t know what else to say tonight. Get ready for the onslaught of articles from the East Coast morning papers and our Canadian friends. Don’t forget that nothing is final yet. No matter what we fight on until the team starts playing, or at least until June 30. Good Luck and Godspeed. Most of All, GO YOTES!

Now these words are remarkably similar to those that were expressed by Winnipeg fans back in 1995 so it’s interesting to see how this has franchise has come full circle.

I’ve been reading the message boards since this news has broke and it seems like the Coyote fans are doing everything they can to mobilize the troops and I wish them well.  It shows a certain amount of dedication to show support for an organization that doesn’t quite deserve same.  As Illegal Curve reader ladders11 posted on IC earlier today the Coyotes have been up against it for a number of years and the fact that they have any fans is impressive considering the laundry list of things they’ve dealt with, such as;

I wish that Winnipeg could regain its status as an NHL city, but this isn’t about Winnipeg.  Any team relocation plans don’t currently include Winnipeg and the conversation is focussed solely on moving this team to Southern Ontario.  So while I can understand the economic reasoning that many pundits are calling for the Coyotes to be moved to a more hockey-centric area such as Southern Ontario, once again little regard is shown to those die hard fans that would be left behind.  While I am sure that many of my fellow Pegger’s would not consider themselves fans of the Coyote’s organization, the loss of a team is a sentiment that we understand all too well and one which we may, ironically, now share with our brethren in Phoenix.

Perhaps I’ve grown soft and readers think its past due the Coyotes left the desert?  Do you view Balsillie as a modern day Moses leading his flock out of the desert and into the promised land?  Or should the Coyotes stay in Phoenix?  Sound off in the comments section.

WWYCF: Who Would You Cheer For?
I Got Wood