Jets goalie will suit up for Czech Republic. 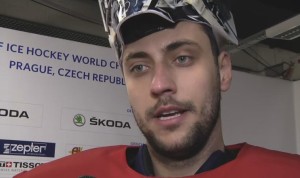 Many Jets fans have set their sights on the 2016 NHL Draft as well as the World Cup of Hockey 2016 Tournament next September in Toronto.

Teams are starting to name their rosters and Jets goalie Ondrej Pavelec was one of those to get the call for his country.  The Kladno native will be donning the Czech Republic uniform once again.  He has won gold (2010) and bronze (2011) in the World Championships as well as having played in the 2010 and 2014 Winter Olympics.

Here is a list of the 16 players named to Team Czech Republic so far.

Ondrej Pavelec spoke today following skate about what it means to be selected and put on the Czech jersey: