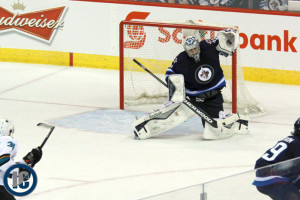 Quite a way to end the season for the Jets netminder.  From backup to #1 and now given 2nd star billing by NHL to close things out.  Of course with three straight shutouts you would think he would have earned 1st star but that went to Jamie Benn of the Dallas Stars who had five goals and five assists which helped him win the Art Ross Trophy.

The Winnipeg Jets hockey club, in conjunction with the National Hockey League, today announced that goaltender Ondrej Pavelec has been named the NHL ‘Second Star’ of the Week ending April 12/15.

This is the second time Pavelec has been recognized by the league for his play as he was named the ‘First Star’ of the Week for the week ending March 22/15.

Pavelec, 27, did not allow a goal in the three games he played, leading the Jets to the franchise’s first berth in the Stanley Cup Playoffs for the first time since 2007. Overall, he stopped all 83 shots he faced in recording three consecutive shutouts. He has a 32-save shutout April 6/15 vs. Minnesota (2-0 W), and then became the first goalie in Atlanta/Winnipeg franchise history to record back-to-back shutouts on consecutive nights with a 31-save effort in blanking the St. Louis Blues (1-0 W). He completed his week with a 21-save shutout, but the Jets dropped a 1-0 shootout loss to the Colorado Avalanche on April 9/15. He will enter the post-season on shutout streak of 187:05. He completed the week with a 0.00 goals against average and a 1.000 save percentage.

On the season, Pavelec finished the season with a record of 22-16-8 with career bests in save percentage (.920), goals against average (2.28), and shutouts (5). His 16 career shutouts became a franchise record this season. He is already the franchise leader in games played (338) and wins (135).