Monster great in Leafs win; The secret about the Rangers Envir Lisin; Dallas Stars might be for sale; Should the Wild already be looking to next year’s draft? These stories and more after the jump.

Just a reminder that the guys will be posting their interview with Theo Fleury tomorrow on the IC radio show (from 7pm-9pm cst) which they conducted live on The Great Canadian Talk Show on KICK FM today.  To read more about IC Radio, or listen to past shows/interviews, click here.

And now for word from around the blogs:

Just came across this on Andrew’s Dallas Stars Message Board.  It appears a Leafs fan has had enough and put his allegiance to the Leafs up for sale.  It was purchased by a Stars fan (who wrote about his purchase here), so the guy has now converted to being a fan of Dallas.  Ironically one of the bids was $19.67. ha. 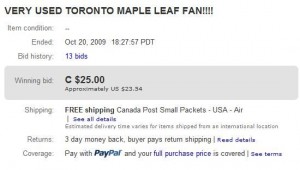 If you have an interesting blog or blog post, please let me know; dave@illegalcurve.com.

On the Beat: Crosby to carry Olympic torch, Monster gets his 1st NHL victory, Sabres coach can’t keep straight face on Myers, Grebeshkov to blame for most Oilers goals.
Nightly Hockey Hits: Top 10 Things that changed the game, trade talk about Kaberle, Giguere and Toskala, Winnipeg to host World Under 17 Hockey Challenge in 2011 and 2012, a hockey game not a good spot for 1st date!