Nightly Hockey Hits: Islanders closer to hiring moving vans, Jacques Martin isn’t using kid gloves with the Habs, To play or not to play in the Olympics, Sharks sign Malhotra on the cheap.

Did K.C. remove itself from the running as a possible expansion (or relocation) city as a result of yesterday’s poor attendance? Would losing in 2009/10 benefit Carolina in the long term? To play or not to play in the 2014 Winter Olympics. Top 10 Leafs fights of all time. These stories and more after the jump.

Some news and notes from across the blogs:

Tonight’s picture of the night comes courtesy of the Battle of Alberta as the Flames beat the Oilers on the score sheet (5-3) and with their fists: 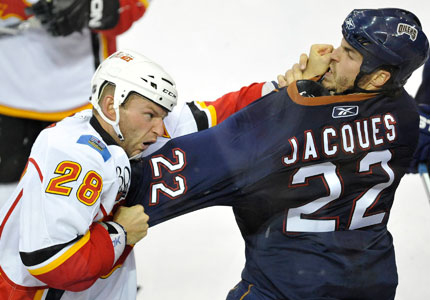 Nightly Hockey Hits: Flyers faithful already planning Cup parade, Judge T. Baum calls for emergency hearing, Is Crosby better than Ovechkin? Canucks are perfect in pre-season but is this a bad thing?
Nightly Hockey Hits: For Gretzky Canada May Be Calling, Andrew Ference leads anti-Kelly faction within PA, Are the Blues making a mistake jetting off to Sweden?