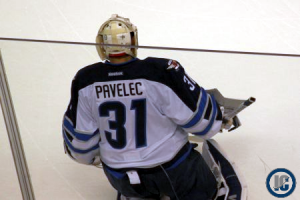 Reminder: Tomorrow’s Illegal Curve Hockey Show on TSN 1290, will air at a special start time of 3:00 PM CT, live from the NHL Store in mid-town Manhattan. Prior to IC, TSN 1290 will broadcast a national pre-draft special, airing across the country from 1100 AM – 300 PM CT, and featuring the TSN insiders and radio personalities, including IC.

On Sunday, starting at 200 PM CT, IC and H & L will bring you exclusive NHL Draft coverage on TSN 1290, live from the Prudential Centre in New Jersey and from the Winnipeg Jets Draft Party in Winnipeg.

All weekend long, illegalcurve.com will have the latest news, audio, analysis and insight from everything NHL Draft related.

Without further adieu, here are today’s NHL Morning Papers, or as I like to call them, the calm before this weekend’s storm of news.

Pavelec is the man, but then what? Ed Tait looks at the Jets goaltending situation, completing his overview of the Jets roster and system ahead of this Sunday’s NHL Draft

“He was like my American Dad” Teemu Selanne reflects on his relationship with Don Baizley, his long-time agent

Flames ship Tanguay back to the Avalanche Let’s put it this way; if you ever played with Joe Sakic in Colorado, and he hasn’t hired you or traded for you, you should be insulted.

Kris Letang: Ex-Penguin? Keep an eye on Pittsburgh this weekend. If they can’t reach a contract agreement with Kris Letang, he could be moved at the draft, much like the Penguins did with Jordan Staal last year at the draft.

Emotions Running High in Letang Negotiations HNIC’s Elliotte Friedman with his analysis of where the Penguins and Letang currently stand, negotiation wise.

One more year for Alfie? Not yet confirmed, but indications are that Daniel Alfredsson will be returning to Ottawa for one more season.

Lightning say Bye Vinny, and Buy Him Out Lecavalier still has plenty of talent, as evidenced by his 0.8 PPG average last season. His contract was just too expensive for the Lightning. He will have many suitors.

Reimer not Going Down Without a Fight James Reimer has defied the odds and experts thus far. Now we will see if he can ward off Jonathan Bernier, the latest challenger to his crease.