We asked the players what they think when they hear ‘True North’ during the anthem.

Some things are beyond a team’s control.  When fans get an idea germinating in their heads, and when word starts to spread, anything is possible.  It was in this vein that the idea began to sweep the city to pay tribute to the organization that brought the NHL back to the city of Winnipeg.   It began on the message boards and has been adopted by each crowd that takes in a Jets game.  If you want to learn more about how the ‘True North’ chant was created it was covered by the Winnipeg Free Press last month. 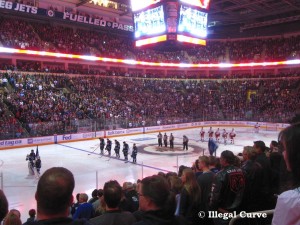 For those who haven’t been able to take in a game yet this season, during the singing of the Canadian anthem, the crowd of 15,004 emphasizes the words in this part of the anthem:

With glowing hearts we see thee rise,
The True North strong and free!

Watch/listen to this video to hear the words said by the MTS Centre crowd:


I personally love this tradition.  It is a respectful innovation that plays on the lyrics in the song to show the crowds appreciation to the True North organization.

We wanted to know what the players thought of this tradition and here is what they said:

Even players that aren’t from Canada enjoy the emphasis on ‘True North’;

So what do you think?  Are you a fan of this tradition?  Do you dislike it?  Sound off in the comments section.