You might hear about people not showing up to Coyotes games, but here are some pictures that detail the attendance plight in Glendale.

On this week’s IllegalCurve.com Radio Show, we talked about one of our friends heading to Phoenix to catch a couple of games this weekend.  Well, after seeing the Flames play the Coyotes last night in Glendale, he had much to say.  However, the pictures that he has sent along may say 1,000 words. 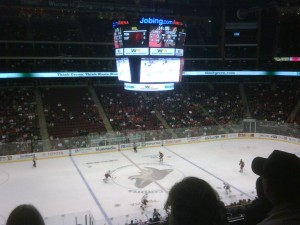 To add to the picture above, the announcers at the game in Glendale did not publicly announce the crowd.  On top of that, apparently the crowd was hoping equally for Calgary/Phoenix, maybe even a majority in favor of the Flames. 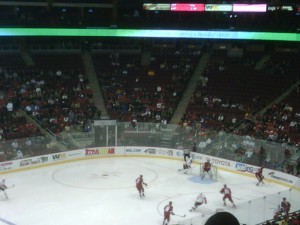 Moreover, our friends who attended the game sat in center ice box seats for the price of $40 per ticket.  As well, apparently a number of other boxes were completely empty. 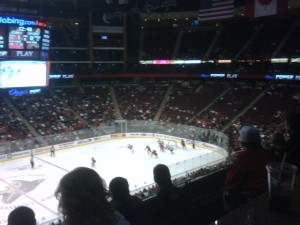 With about 5,000 fans on hand to see the Coyotes and Flames play (both good teams mind you), how on earth does the NHL plan to sell this team to someone willing to keep this team in Glendale?

If this team is slated to lose $50 million, as some have reported, it appears the Coyotes are not long for Arizona.  The question I have is: Which city do you think the NHL will end up in next?  Apparently Gary Bettman says the MTS Centre in Winnipeg is big enough.  What about Quebec City?  Is Kansas City still a realistic option?  Las Vegas?  Or do you think this team can sustain itself in Arizona?