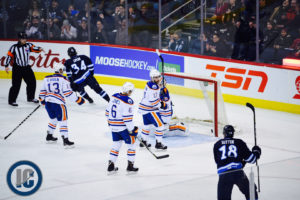 The Moose took on the Oilers’ minor league affiliate – the Bakersfield Condors – Friday night at Bell-MTS Place. After leading the AHL’s Central Division for the majority of the season, the Moose fell out of first place after losing 5 straight games – they sat one point back of the Chicago Wolves entering the game. Earlier this week, it was announced that three Moose players would go into the AHL’s 2018-19 record books, with forward Mason Appleton and defender Sami Niku named to the All-Rookie Team, and goaltender Michael Hutchinson named to the Second All-Star Team. Michael Hutchinson got the start in goal tonight, while Nic Petan, Patrice Cormier, and Julian Melchiori were all out of action with concussions.

Very early in the first, Michael Spacek and Brendan Lemieux got behind the Condors’ defence and had what seemed like a sure goal – Spacek froze the goaltender and fed Lemieux at the side of the net, but Lemieux wasn’t able to fill the temporarily empty cage. Later in the first, the top line did strike, as Appleton and Spacek came in two-on-one, and Appleton fed a gorgeous pass through a defender to Spacek on the back-door, and he opened the scoring. Then, under a minute later, a Condor defenceman slipped in his own zone, and J.C Lipon was able to come in all alone on Laurent Brossoit – he chipped a puck top-right corner to give the Moose a 2-0 lead. Michael Hutchinson wasn’t terribly busy in the first (5 shots on goal), but he made a huge pad save to help preserve the lead, coming across from his left and making what seemed like an impossible pad save. The Moose took a 2-0 lead to intermission, up 8-5 in shots.

The second period started out slow and choppy, with the Moose ceding zone time to the Barons simply through sloppy play and poor decisions. The Barons weren’t able to take advantage, and the Moose began to take back control later in the period. Chase De Leo had the first good Moose chance of the period, as he cut through the Barons’ defence with speed and precision, but his shot was kicked out by Brossoit. A flurry of activity led to another seemingl sure goal for the Moose, as Jansen Harkins had a shot from the slot with Brossoit down and out, but rookie defender Dmitri Samorukov moved behind the goal line and kept the puck out with his shin pads. With under a minute left, the Barons missed a goaltender opportunity to get within one – Tyler Vesel took a cross-crease feed and had half the net empty, but he flubbed the shot wide to preserve a two-goal lead for the home side.

The Moose had a good chance to open the third, with Buddy Robinson feeding Chase De Leo in the slot, but he fired it into the crest. A few minutes later, the Moose took a bench minor for too-many-men, and paid for it, as Josh Currie received an errant pass in front of the net and beat an unsuspecting Hutchinson to make the score 2-1. With just under 5 minutes left in the third, Brody Sutter wrapped the puck around the net, and the puck slid right onto the waiting stick of J.C Lipon, who roofed a backhander for his second of the night, giving the Moose a more comfortable, 3-1 lead. Then with 1:21 left in the game, and the Barons’ net empty, Lipon managed to get the puck in open ice and finished off the hat-trick.

-With the win, combined with a Chicago loss, the Moose temporarily move into first place in the Central in terms of points, with 88 to Chicago’s 87. The Wolves, however, have a game in hand, and the AHL doesn’t technically base its standings on points, but on winning percentage (due to the California teams who play a shortened schedule).

-Sami Niku was up to his old tricks in his first game back with the Moose since his one-game NHL recall. He made several would-be forecheckers miss in the offensive zone, starting from a stand-still in the offensive zone. He routinely makes this play, where he draws defenders to him at the line, and then easily cuts past them on his way to the net. (For reference, this isn’t any more common in the AHL than it is in the NHL. Defensively, he had a few lapses where he left a dangerous attacker alone in scoring position, but he didn’t pay for any of his mistakes.

-The top line of Spacek, Lemieux, and Appleton were the best line for the Moose tonight, with Spacek connecting with both of his wingers on potential scoring plays; Lemieux wasn’t able to bury his off Spacek’s crafty set-up, but Spacek converted off of Mason Appleton’s sweet feed. After starting off the season with 1 goal and 4 assists in his first 16 games, Michael Spacek has 14 goals and 16 assists in the last 50 games – nice totals for a 20-year-old rookie who’s still adapting to the size and pace of the pro game. Meanwhile, with an assist tonight, Appleton is up to 62 points on the year, which places him 1st among rookies, and 4th among all AHL’ers, period.

-Jansen Harkins and C.J Suess both looked good in limited ice time. It was Harkins’ first game after being out of the lineup with mononucleosis since February 25th. Harkins had a few great shifts in the first period where he was skating very well with the puck and creating chances, while Suess nearly scored his second of the year in his 4th pro game, but hit the post.

#MBMoose forward JC Lipon spoke after registering his second hat-trick of the season in the 4-1 victory over Bakersfield #GoMooseGo pic.twitter.com/UIEMlMGKpA

#MBMoose Head Coach Pascal Vincent, spoke about the difference the week of practice made in tonight’s 4-1 victory over the Condors #GoMooseGo

For more post-game interviews and highlights, head to: https://t.co/nkd4J5YAWT pic.twitter.com/Nqh3M5x1O3

April 8th at Bell-MTS Place at 2 pm versus Bakersfield.