-The Moose broke out of a 7-game winless streak with their 5-3 victory over Rockford last Saturday
-With 11 games left in their season, the team sits 11 points back of Charlotte (who has 13 games remaining)
-Kyle Connor continues a torrid month of March, with 8 goals and 4 assists in 9 games
-Jack Roslovic meanwhile has 2 goals and 4 assists in March, but was held pointless in 5 of those 9 games
-Brendan Lemieux is out for the year with a lower-body injury suffered on March 14; Lemieux had been hitting his stride prior to injury, scoring 4 goals in the previous 8  games, along with 29 shots on goal in the past 10
-2012 Florida Panthers draft choice, Francis Beauvillier, was in line to play his first AHL game after signing an Amateur Tryout contract (ATO) with the Moose on Wednesday
-The Jets’ 3rd round pick in 2016 – Luke Green – was also signed to an ATO on Wednesday, but was not in the lineup 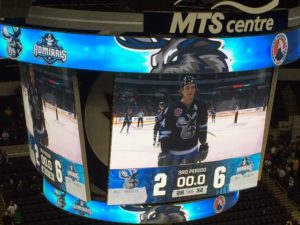 Admirals Goal (1): Short-handed due to a Dan DeSalvo tripping penalty, Frederick Gaudreau capitalized on a gaff by Jan Kostalek, converting a prime shot from the slot past the blocker of Eric Comrie.

Admirals Goal (2): Off a slapshot from the point, rookie defender Jake Kulevich was out-dueled for the rebound by Stephen Perfetto, who put the puck easily past a still crouched Comrie.

Moose Goal (1): Kyle Connor doing Kyle Connor things – he picked up the puck in the slot, made a quick deke to his backhand, wheeled towards the corner and then suddenly whipped a backhander across his body, top-cheese, beating former Preds back-up Marek Mazanec. His 22nd goal of the season, in just his 45th game.

Admirals Goal (3): Just over a minute into the second, the Admirals struck on another PP – sniper Pontus Aberg blasted a one-timer past the blocker of Eric Comrie. His 26th of the season.

Admirals Goal (4): On yet another PP, the Admirals came in two-on-one, and Trevor Smith fed Mike Ribeiro, who placed a one-timer beautifully past Comrie. Comrie looked a bit rattled.

Admirals Goal (5): Just 20 seconds later, Stephen Perfetto came down the right wing and wristed one past Comrie’s glove – not a great goal. Comrie was pulled.

Moose Goal (2): On a bad Admirals’ line change, Darren Kramer got a partial breakaway and beat Mazanec over the right pad and under the blocker. His second of the season.

Admirals Goal (6): With over 5 minutes left in the third, coach Vincent pulled his goalie for an extra attacker, but it backfired, as longtime NHL’er Mike Ribeiro scored into an empty net. It was Ribeiro’s 4th point on the night, and 19th in 19 AHL games.

He made a few good saves in the first – including a spectacular one coming across to foil a 2-on-1 early in the first off a Stoykewych miscue. Things unraveled in the second, as the Moose penalty kill was hopeless to stop Milwaukee’s powerplay, and Comrie didn’t quite look himself.

In all, Comrie gave up 5 goals on 16 shots and was pulled for the second time in the last 5 games.

Phillips came on in relief of Comrie and played well. He made a nice glove save off former Bruins call-up Justin Florek in the slot, and another nice one off a dangerous 3-on-2. He saved all 15 shots that he faced.

He looked big and calm in net, using solid positioning to stop the puck.

He had some trouble in his own zone – he misplayed a two-on-one, where he didn’t take away the pass or the shot (Comrie made the save), and he was beaten to the rebound on the Admirals’ second goal. This early in his career, it’s all a learning experience.

He turned a decent chance in the slot into a goal in no time flat; his quick strike ability is nearly unrivaled in the AHL – the speed, the hands, the shot – these type of players typically aren’t in the AHL very long

His game could use more battle – he loves to have the puck on his stick, but he doesn’t seem as eager to get it back. Asked about this after the game, Coach Vincent suggested this would improve as he gets stronger.

He had chemistry with Kyle Connor – they had one particularly dominant shift at the end of the first where the two of them lagged the puck around, looking for each other, and creating high quality chances; he also drew an assist on Connor’s goal in the first

He’s getting big minutes on the pk, and not looking out of place. He’s dogged on the forecheck/backcheck, and has good awareness of where everyone is on the ice – both teammates, and opponents

J.C Lipon tells us whether there were any positives to take from tonight’s game

Rookie d-man Jake Kulevich talks about his play, and the making the adjustment from the NCAA to the AHL

The Moose get a shot at redemption as the again host the Admirals Friday night at the MTS Centre.