Moose Sneak by Checkers in 2-1 Win

After a 6-2 loss on Saturday against Charlotte, the Moose renewed acquaintances with their divisional rival Monday night at the MTS Centre. With injuries abounding at the NHL level, and call-ups a plenty, the Moose continue to compete with a depleted lineup. Two more players made their Moose debuts tonight – in all, ten skaters in this lineup didn’t play on opening night. 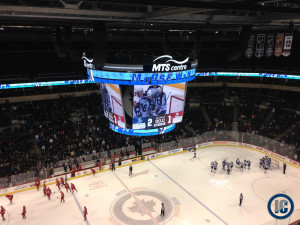 Just over a minute in, Checkers’ captain Derek Ryan deflected a point shot in the slot, which found its way through Connor Hellebuyck. 1-0 Checkers.

After several nice stops by Hellebuyck kept the Checkers’ lead to just one, Scott Kosmachuk raced in two-on-one with Chase De Leo, cut into the slot, and fired a shot low blocker, tying the game at 1.

Minutes later, Kosmachuk broke in again on a partial breakaway, but was tripped; while the play looked suspicious, there was no call.

With two minutes left, Chase De Leo walked into the high slot and fired a hard pass at the net, which was deflected by Kosmachuk and nicked the post, but didn’t go in.

Then, with under a minute left, Derek Ryan picked up the walk at the side of the net, and tried to wrap it around to the far post, but Hellebuyck stretched out his left pad to keep the game knotted at one.

On the powerplay, John Albert made a shifty play up the wall, and fed a nice pass to Scott Kosmachuk, who sneaked in from the left faceoff dot and picked the five hole on goaltender John Muse, putting the Moose up 2-1.

With under ten seconds left, Chase De Leo hustled to a loose puck, and looked to seal the game with an empty netter; unfortunately, his shot hit the right post, and the Checkers were off the other way, eventually getting a last-second chance, and forcing Hellebuyck to come up big one last time.

Josh Morrissey did not play – his status is week-to-week. It’s been 9 games since he last played on March 7. Jan Kostalek and Eric Comrie are day-to-day, while Peter Stoykewych, Ryan Olsen, and Thomas Raffl are done for the year.

Scott Kosmachuk – He scored both goals tonight, each being a “goal scorer’s goal”. He probably could have had one or two more. Beyond that, he came out with tons of jump, and was playing well before he had a goal to his name. He now leads the Moose with 17 goals in 61 games. He’s giving the Jets something to think about.

Connor Hellebuyck – With the Moose losing the possession battle early, Hellebuyck held down the fort for the first half of the game. And regardless of the score, he was rock solid, allowing one goal on 27 shots, and making big saves at key times. He has now won four straight starts, allowing just three goals in that span.

Jake Baker – Playing in just his 9th AHL game since being added from the ECHL, Baker already looks like a player who belongs. He was very noticeable defensively, breaking up several offensive forays, and playing a physical, yet controlled game. When asked about his play, Keith McCambridge said that Baker has been a very pleasant surprise for his club, who has played the role of a #2 or #3 defenceman. He also alluded to his future, suggested there may be a spot on the roster for him next year.

Connor Hellebuyck talks about the win, and assesses his own play

With 3 goals in his past 2 games, Scott Kosmachuk talks about his scoring streak