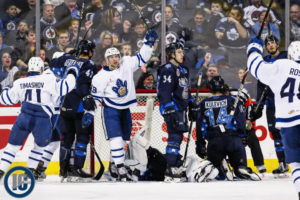 The Moose were coming off a heartbreaking loss last night when they lost 3-2 to these same Marlies with 24 seconds left in the 3rd period.  Neither team had time to dwell though as the re-match came 16 hours after Friday’s game concluded.

– Moose were down 2-0 quickly despite carrying the play early in the game;
– Darren Kramer scored his third of season to make it a one goal game after Francis Beauvillier forced a turnover;
– Mason Appleton scored his 21st goal of the season to tie it up;
– The home side took the lead 3-2 when recently signed CJ Suess scored his first pro goal;
– The lead lasted nine minutes though as the Marlies evened it at 3 after 40 minutes;
– After Marlies scored 1:25 into final frame, Brody Sutter scored his third goal in three games to tie it up;
– The Marlies took the lead for good after an ill advised Lemieux double-minor.
– Shots were 36-32 for Toronto.

April 6th at 7 pm at Bell MTS Place when the Bakersfield Condors come to town.