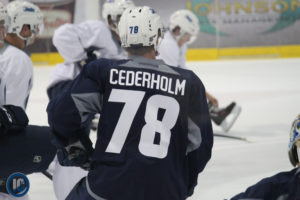 The happiest draft pick I’ve ever met at a draft.  Back in 2016 in Buffalo (watch his chat with us here) Cederholm was grinning from ear to ear after he was selected by the Winnipeg Jets in the 4th round (97th overall).  Today, he was signed by the Moose to an amateur tryout agreement.

Cederholm, 20, joins the Moose after capturing the Swedish SuperElit league championship with HV71 J20. Cederholm posted a pair of assists in six playoff games. The Helsingborg, SWE native appeared in 29 professional games this season with HV71, Vasterviks IK and IK Oskarshamn. Cederholm was selected in the fourth round, 97th overall, by the Winnipeg Jets in the 2016 NHL Entry Draft.