A recap of the game action. 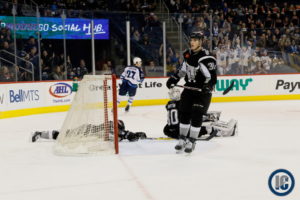 The Moose played their last home game prior to the break – a re-match of Thursday night’s game (won 7-2 by the Moose) against Colordao’s AHL club, the San Antonio Rampage. The Moose came into this game with the following, eye-popping stats:

Tonight the team gave away Manitoba Moose Gnomes as you can probably tell by tonight’s headline.

For a complete scoring summary check out the game Sheet link.

Moose Goal: Off a terrible giveaway by a Rampage defender, Brendan Lemieux got the puck right in front and managed to poke the puck over the line on a second opportunity.

Moose Goal: Jack Roslovic created this play when he stripped the puck in the offensive zone and fed a blind,backhand pass right over to Nic Petan; Petan broke in alone and was foiled on a deke, but the puck squirted to Mason Appleton in the slot, who out-waited Spencer Martin and put it home.

The Moose out-shot the Rampage 13-7 in the period

The Moose put forth a poor effort in the second, and were out-shot 19-5

Moose Goal: Mason Appleton sealed it late in the third with an empty net goal, assisted by Jack Roslovic

With two assists tonight, Jack Roslovic moves into first in AHL scoring with 35 points in 31 games. Roslovic also had 4 shots on goal, 3 scoring chances, and was named 2nd star

With two goals tonight, Mason Appleton becomes the leading rookie scorer in the AHL, and is 5th overall (31 points in 31 GP)

“If we didn’t have Hutch back there, it could have been a totally different story.” – #MBMoose defenceman Cameron Schilling on tonight’s 3-1 win over the Rampage. #GoMooseGo pic.twitter.com/I0AfBCPkm4

The Moose have an extended Christmas break, as their next game isn’t until December 30, when they host the San Jose Barracuda.