After a weekend series in Lake Erie which saw the Moose come away with a win and a loss, they returned home to face the Stockton Heat. Coming into tonight’s game, the Moose had played Stockton twice, losing each in extra time (OT and a shootout). With Petan, De Leo, Kosmachuk, Lipon, and Halischuk up with the Jets, and Raffl, Morrissey, Kostalek, and Stoykewych injured, they dressed a lineup which included 10 players who have played part of the season in the ECHL, and 8 who played the majority of the season there. 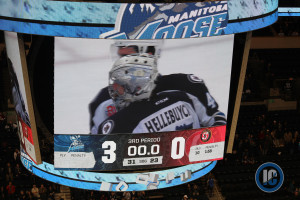 The Moose had an incredible chance in front with Kevin Poulin lying on the ice, but no one could lift the rebound over him; immediately thereafter, the Heat came back the other way on a partial break, but a great back-check by Jake Baker and a calm and composed Connor Hellebuyck kept the puck out.

With 17 seconds left, and the Heat working the puck around on the PP, Hellebuyck slid to his right and made a nice right-toe save on a potential back-door feed.

Then, with just seconds left, Austen Brassard came out of the penalty box and was sent in all alone, but with a back-checker charging hard, he wasn’t able to get as much on his shot as he would have liked. It was 0-0 after the first.

Just 38 seconds into the second, Patrice Cormier entered the zone and gave it to John Albert, who made a crafty backhand pass to Brenden Kichton in the slot; Kichton held it briefly then roofed it high-glove past Poulin to give the Moose a 1-0 lead.

Just a minute later, Darren Kramer found a loose puck in the crease and buried it behind Poulin, putting the Moose up 2-0.

With the Moose on the powerplay, a scramble in front kicked out a rebound to Brenden Kichton, who was lurking in the slot. Kichton sniped his second of the night, again high glove. 3-0 Moose.

With the heat pressing late in the second, Hellebuyck made a massive right-pad save on a Heat forward who was streaking across th crease, keeping the lead at 3.

The third period was pretty uneventful, with the exception of a mini-brawl which broke out with 2 seconds left, which ended with a tussle between Moose forward Darren Kramer, and 6’7 winger, Hunter Smith.

Brenden Kichton – Kichton scored two goals today in the same fashion – sneaking up into the slot area and firing the puck into the top-right corner. On a club which is currently missing three of its top four scorers, his offensive contributions are essential.

Connor Hellebuyck – After the Moose gave themselves a nice lead, Hellebuyck shut the door, with big saves at key times. As usual, he stayed square to shooters, and also displayed really nice lateral movement and anticipation.

John Albert – He made a slick pass to Kichton on the game’s first goal, and came away with 2 assists on the night. His return to health has been a huge boost for the Moose in the past few months, as injuries really limited his play early in the year, despite his insistence on remaining in the lineup for much of that time.