Recap of the game.

The Moose and Wild faced off at MTS Centre in the second of a two-game series. The story of the night was scarcity – injuries to Josh Morrissey, John Albert, and Thomas Raffl, recent trades of Jay Harrison and Matt Fraser, and the call-ups of J.C Lipon, Matt Halischuk, and Scott Kosmachuk left the Moose incredibly depleted, especially at forward; of the 18 skaters in tonight’s lineup, 7 were rookies, and 4 spent nearly the entire season in the ECHL prior to tonight’s game. 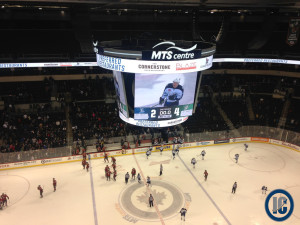 Key Plays of  the Game

3 minutes into the game, Maxime Fortunus’ shot from the point beat a screened Connor Hellebuyck, putting the wild up 1-0.

Ten minutes later, a 3-on-2 for the Wild caused the Moose to collapse towards the goal line – a nice pass from Rob Bordson found Zach Palmquist alone in the slot, and he one-timed a quick shot high glove. 2-0 Wild.

On a 5-on-3 powerplay, Wild forward Jordan Schroeder took a shot from a wicked angle and beat Hellebuyck high short-side to put the Wild up 3-0.

After Hellebuyck steered a rebound to the corner, Rob Bordson took a shot from a steep angle – very similar to the Schroeder goal – which found the top corner on the short-side. 4-0 Wild. Eric Comrie came in to relieve Hellebuyck.

After some nice work behind the goal line by Jiri Fronk, Ryan Olsen fed the puck into the slot for Nic Petan, who one-timed it past Michalek to get the Moose within two.

The Moose were outshot 41-20 on the night – with Hellebuyck giving up 4 goals on 18 shots, and Eric Comrie saving all 23 shots he faced

Nic Petan – On a night where the Moose were dominated in every facet of the game, Petan was one of the few Moose players who was making things happen in the offensive zone, using great speed, shiftiness, and his patented, spinning backhand pass. He was also good in the defensive zone, making some hard plays and smart plays without the puck.

Eric Comrie – After Hellebuyck was pulled midway through the second, Comrie came in and had a stellar performance in relief. He played with the kind of intensity you’d expect from a starting goalie in an important game – statements that didn’t remotely apply to this situation – and made a few impressive saves to keep the score respectable.

Jan Kostalek – Kostalek was noticeable tonight, jumping up in the play from the right point, getting good shots on net, and playing more physically than he has for most of the year. After a tentative start to his rookie year, he’s looked a lot more confident and assertive in the past 5-10 games, and is definitely trending in the right direction.

Coach McCambridge announced that Thomas Raffl is done for the season.  Said as of right now he doesn’t need surgery.  Josh Morrissey continues to be listed as day for day.  Said he hopes to have John Albert back for one of the two games this weekend.