After losing game 1 on Friday night, the Moose took on the Rockford Ice Hogs in game 2 of their second round playoff series at Bell-MTS Place. The opening game was tied 1-all through two periods before Rockford took over early in the third period off of two quick goals scored just 45 seconds apart. Penalty troubles also contributed to the loss, as the Moose were penalized six times, five of which came in the final 20:13 of the game. There were two lineup changes for today’s game, with Jansen Harkins making his playoff debut, and Michael Spacek returning from his three game suspension. Eric Comrie got the start in goal as the Moose looked to avoid going down 2-0. 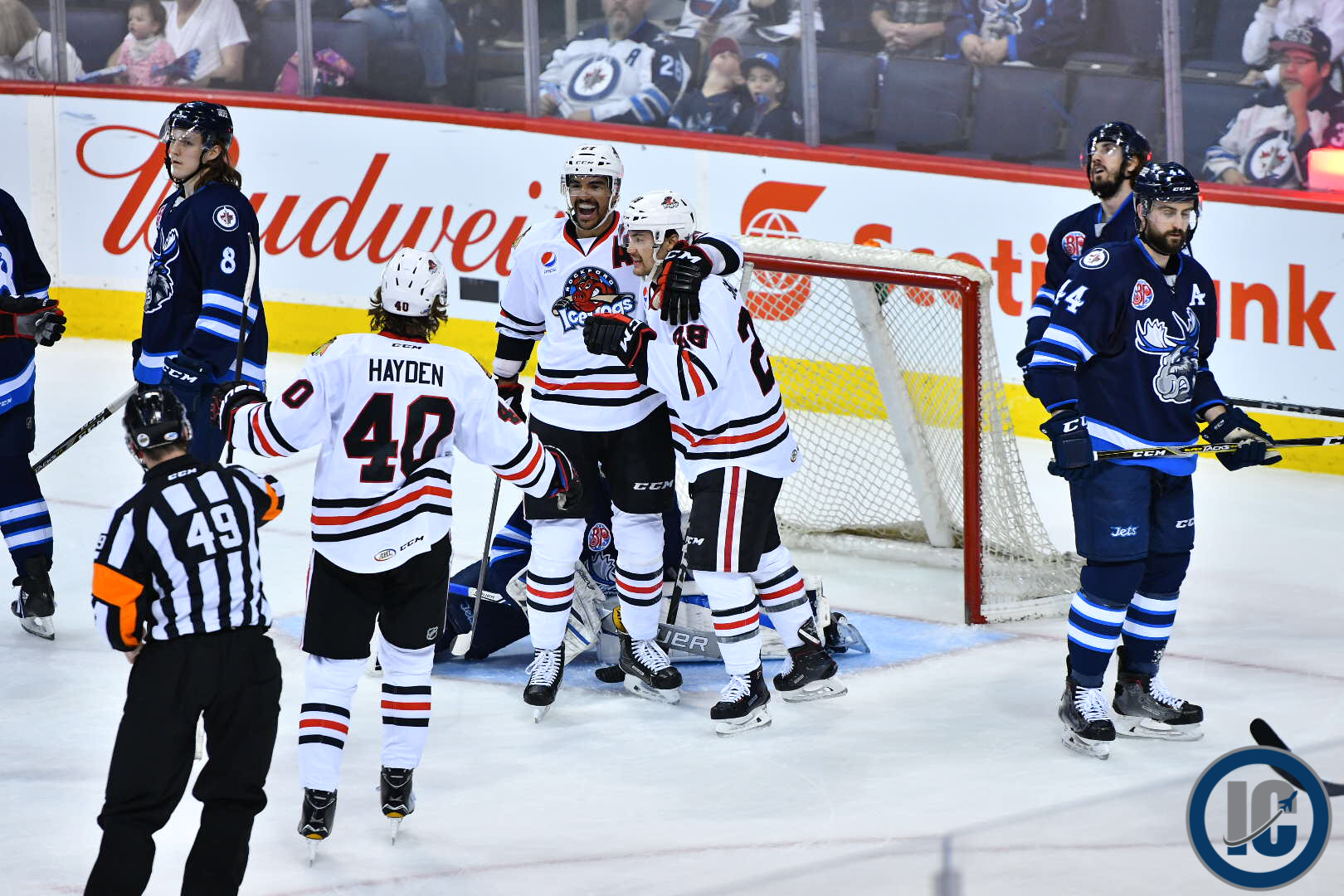 Similar to last game, the first 15 minutes of this game were a feeling out process. Neither team had a single good chance on goal, and shot totals were under 5 for each team. Late in the period, after some great pressure in the Rockford zone, the Moose managed to open the scoring – first, Sami Niku danced a defender at the blue line and fed it over to Melchiori on the left point; Melchiori then passed it to Cormier in the slot, who moved it over to Petan at the right faceoff dot. Petan waited, then fired a hard pass to Brendan Lemieux, who tipped it past Collin Delia to put the Moose up 1-0. The Moose followed that up with another good shift, with Jansen Harkins doing good work behind the net, and Jan Kostalek almost setting him up for a tap-in on the back-door. But with just over a minute left in the third, the IceHogs tied things up. It started with a sloppy rebound by Comrie off of a soft point shot, and Rockford forward Tyler Sikura found the puck amongst three Moose defenders and tie it up at 1. The first period ended 1-1, with shots at 10-9 for the Moose.

3:32 into the period, Peter Stoykewych tripped William Pelletier into the boards, putting the Moose down a man. On the powerplay, Chris Didomenico got the puck at the left faceoff dot, walked all the way across the slot and fired back across the grain, beating Comrie locker side and giving the IceHogs a 2-1 lead. The Moose then carried the play for most of the period, earning some good opportunities, including a wild scramble in front of the net which almost led to a goal, but they weren’t able to even it up. Then with under five minutes to play, Gustav Forsling fed a puck over to Carl Dahlstrom, and his one-timer beat Comrie glove side, giving the Hogs a 3-1 lead. The Moose had a late powerplay but weren’t able to get any chances or generate any momentum. Despite out-shooting Rockford 14-6 in the period, they went to the room down 3-1.

The Moose had an opportunity on the powerplay five minutes into the third, but they weren’t able to do much beyond set up in the zone. They got into penalty trouble midway through the period, with penalties to Gotovets and Kostalek putting them down 5-on-3, but they were able to kill it off without too much trouble. They passed the 30-shot mark with over 6 minutes left in the third,  but still, they weren’t able to get inside the high-danger areas often enough to beat Collin Delia and narrow the deficit. They pulled Comrie for the extra attacker with around 2 minutes left, and had great pressure in the Rockford zone, but it was too little, too late. With just 9 seconds left, former Avalanche forward Andreas Martinensen put a bow on this one, getting an empty netter to make it 4-1.

-Just like last game, the Moose got on the board first, but were undone by a late goal in the first period, and two quick goals in the second. The Moose did a good job of pressing, out-shooting the IceHogs 34-21 in this game, but it wasn’t enough.

-Eric Comrie was partially culpable on the first and third Rockford goals today. What should have been an easy glove save on the first goal fell from his glove and created a juicy rebound, and he was beaten on the third goal by a one-timer from the point which didn’t come through much traffic. If he makes those saves today, this is probably a much different game.

-Sami Niku left the game in the second period after taking a big hit in the corner. It was definitely an upper-body injury, and it appeared to be in the shoulder area. His status for next game in unclear.

-The Moose were once again without star rookie forward, Mason Appleton. While there was no official diagnosis, he likely suffered a concussion late in On April 22 against Grand Rapids. The team remains hopeful that he may be able to return in this series, but he hasn’t skated with the team yet.

-The Moose are now down 0-2 in this best-of-7 series with the next three games taking place in Rockford, Illinois. If the Moose are able to push this to at least 6 games, the action will return to Bell-MTS Place for games 6 and 7.

Game 3 takes place on Wednesday, May 9th in Rockford.