Manitoba switched to the dark uniforms on Sunday to kick off the post-Christmas portion of the schedule and they got things off on the right skate as they held on for a 3-2 win in the first of two games against the IceHogs.  It improved them to 16-18-0-0 on the season. 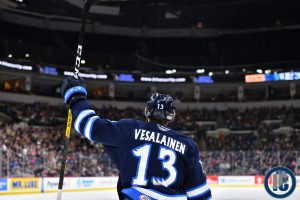 The opening period of the game was fairly ho-hum with both sides getting chances but neither side could solve the opposition netminder.  It would be scoreless after 20 minutes with shots 11-9 in favour of Rockford.

The middle frame however would be a different animal.  The Moose had an early power play which they took advantage of as CJ Suess scored his 10th of the season with assists to Vesalainen and Niku.  50 seconds later on another power play Kristian Vesalainen scored his seventh of the season as he ripped a shot home to make it 2-0.  Emile Poirier got his sixth just a few minutes later to make it 3-0 and then Cole Maier finished off a Vesalainen shot to make it 4-0.  That gave Manitoba four goals in 4:16.  That would be the end of the night for IceHogs goalie Kevin Lankinen and in came Collin Delia.  Whether it was the goalie change or the Moose taking the foot off the gas with a four goal lead the game seemed to change a bit midway through the middle frame.  The Moose were unable to get the puck out of their zone, turned it over a number of times and Brandon Hagel got the IceHogs on the board.  Six minutes later Rockford scored again and the 2nd would end with Manitoba up 4-2.

The final frame saw the game see-saw a bit before Joseph Cramarossa spotted Anton Wedin for a perfect deflection goal to make it a one-goal game just past the midpoint of the 3rd.  Both goalies made some excellent saves and Manitoba would hold on for a 4-3 win.

The Moose will begin 2020 with a weekend series here in Winnipeg against the Colorado Eagles starting on Friday night.