Moose fought back and won the game in OT. Our recap with audio. 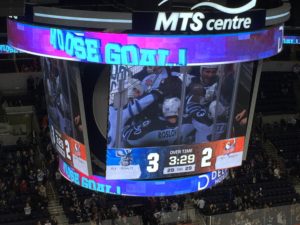 After falling behind 2-1 going into the third period, the Moose tied it up on the PP with 7:34 to go, and won it in OT on a nice back-and-forth passing play by Chase De Leo and Scott Kosmachuk.

San Diego Goal (1): Stefan Noesen set up at the top of the right circle, curled the puck in, and took a low shot which found its way through Comrie.

Manitoba Goal (1): Brendan Lemieux made a great play behind the net, tricking the goaltender with a sneaky, no-look, backhand feed to Quinton Howden, who beat the goalie to the post and snuck it home.

San Diego Goal (2): A wrist shot from the point was deflected quite skillfully in the slot by Corey Tropp, putting the Gulls up 2-1.

Manitoba Goal (2): A fortuitous bounce came right to Scott Kosmachuk in the slot – he took a low wrister, which squirted through the goaltender, right to Chase De Leo, who was just able to slide the puck in.

Manitoba Goal (3):In 3-on-3 OT, Chase De Leo got the puck at centre and waited for Scott Kosmachuk to catch up to create a two-on-one; they passed back and forth, with De Leo holding onto the puck until Kosmachuk got up to the crease, he then slid it across perfectly, and Kosmachuk tapped it home to end the game.

Eric Comrie: After letting in a weak goal early, Comrie was fantastic the rest of the game. He stopped 27/29, highlighted by a stellar save late in the first, where he went post-to-post to stop an almost sure goal. There was no faulting him on the second goal (a skillful deflection), and he made at least 5 saves off odd-man rushes to keep the Moose tied or within one. He was square to the puck all night and challenged shooters well, without exposing himself to back-door plays (which over-challenging goalies sometimes fall prey to).

Brendan Lemieux: Involved in the play early, he made a great pass to Quinton Howden for the first Moose goal. He showed good wheels, driving wide and taking the puck to the net; he created space for others, using his body to shield the puck, and drawing in forecheckers in order to dish off to the best available option. He started the season on the 4th line after returning from injury, and has made his way up to the first line, and is very effective both in the offensive zone, and in transition/off the rush.


Scott Kosmachuk: He made a few good plays early in the game, including a very smart play coming in two-on-one with De Leo, where he shot for the left pad to create a rebound for De Leo who was steaming in (d-man stopped it with a good back-check). He’s very dangerous with the puck in the slot, as he has a very quick and accurate release – a talent he used to create the tying goal, put home by De Leo. Then he potted the winner in OT off a nice give-and-go with De Leo. Kosmachuk’s game tends to be feast or famine in that he goes through stretches where you don’t notice him, but when he’s good, he’s very dangerous; he was good tonight.

Chase De Leo: A quiet game for De Leo through two periods, he came alive in the third, getting his first goal of the season to tie the game, then creating a beautiful play to win the game in OT, feeding Kosmachuk perfectly for the tap in. When De Leo is confident, he’s carrying the puck with speed, and an equally dangerous threat to pass or shoot the puck. This game might help him regain the confidence with which he finished last season.

Jack Roslovic: He displayed a brashness in his game tonight, carrying the puck in front of his own net twice – was it confidence, or cockiness? Although he didn’t contribute on the scoresheet tonight, he continues to be the most dangerous puck carrier on the Moose, with dynamic skill, skating, vision, and a quick, accurate release.

Quinton Howden: He scored the game’s first goal, showing quick hands to take the puck to the net and beat the goalie to the post. He has good speed, skill, and is a very good AHL playe, but he has quite a few guys blocking his path to the NHL…

Nic Petan: He had an off-night, with the only notable plays being giveaways, including a casual behind-the-back pass which was picked off at his own blueline. Look for him to bounce back tomorrow night in the rematch against San Diego.

Andrew Copp: He made a few good plays defensively, and had a few scoring chances he wasn’t able to cash. He also had a few chances to make a play and the puck rolled off his stick. In general, he’s having trouble getting separation from checkers, as he doesn’t have pull-away speed even at the AHL level – that has to a concern for the Jets’ brass.

J.C Lipon: As always, Lipon had good jump, and was hard on the forecheck. He created a few chances offensively and was a positive influence on the good for the Moose.

Anthony Peluso: He had quite a few chances tonight and wasn’t able to convert. He missed a partially open net off a rebound, and also missed a wide open teammate at the side of the net – who likely would have had a sure goal.

Jimmy Lodge: He is struggling to make an impact at this level. Not enough speed and size, and still adjusting to the pace of play.

Ryan Olsen: He made a terrible pass in the offensive zone which created an odd-man rush against. He also took a thoughtless penalty with 12 minutes left in the third, just as the Moose were pressing to tie up the game. (Comrie killed it off). He’s had a tough start to the season.

Peter Stoykewych: The best Moose d-man tonight, Stoykewych broke up a few dangerous cross-ice passes which could have been goals, and jumped up in the play a few times to create help create chances, including a nice foray into the offensive zone, where he took the puck cross-crease and nearly scored. He jumped onto the top pairing today with Melchiori tonight, and if he keeps playing this way, his minutes will only increase.

Jan Kostalek: He continues to improve in his second pro season, playing a more assertive game – holding the blue line, getting shots on net, and making very simple, effective outlet passes. He also looks to have gained some foot-speed in the off-season, as he looked quick on a puck retrieval in his own zone. He’s making good progress as a 21-year-old d-man.


Julian Melchiori: He had a good game defensively, breaking up a few dangerous cross-ice passes, and playing a smart, physical game by playing the body without taking himself out of position. He shows the same offensive limitations game after game – he doesn’t have much vision in the offensive zone, or a dangerous shot.

Nelson Nogier: He looked a little overwhelmed a few times tonight, falling behind his own net, and had his ice-time reduced in the latter half of the game when the Moose were down 1. That said, he’s only played a handful of AHL games, so he has plenty of time to learn the ropes.


Kevin Czuczman: He man’s the first PP unit, and has done in decent job in Brenden Kichton’s absence. He has been fairly reliable for the Moose so far, and was fine again tonight.

Jake Baker: Playing just his second game of the season in place of Brian Strait, Baker jumped onto a pairing with Jan Kostalekwhich might be considered the team’s second pairing. He had one or two instances where his lack of foot speed got him in trouble and created an odd-man rush against, but he’s good at using his long reach (6’5) to break up plays.