Moose, as Polar Bears, claw out 3-2 win over Wild

A recap of the Moose win over the Wild.

Following a disappointing 5-4 loss on Saturday the Moose had a Sunday afternoon re-match with Iowa.  The roster was bolstered by the return to Manitoba of Jack Roslovic, Brendan Lemieux and Michael Hutchinson from the Jets who began their five-day break today.  According to Moose bench boss Pascal Vincent in his pre-game chat with Mitch Peacock, with the status of Jets goalie Steve Mason uncertain the Moose didn’t take any chances and scratched Hutchinson from the lineup.

– Buddy Robinson scored his team leading 18th goal;
– Tucker Poolman had two assists, his first multi point game in the AHL;
– Peter Stoykewych had a goal & assist (he has tied his career high in points at 20 in 33 less games);
– Brendan Lemieux picked up an assist and has a six-game points streak;
– Francis Beuvillier scored his first goal of the season which turned out to be the game winner. 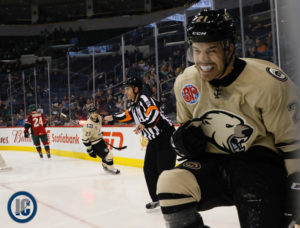 #MBMoose forward Brendan Lemieux spoke about coming back down from the Jets and making an impact in today’s 3-2 win #GoMooseGo pic.twitter.com/gGbvVqJKjC

“They’re four point games when you’re competing against teams in your own division.” – #MBMoose forward Peter Stoykewych on a tough divisonal win against Iowa #GoMooseGo pic.twitter.com/wqzh00woHu

Head Coach Pascal spoke about the 3-2 #MBMoose victory and the team’s adjustment to a tight defensive game #GoMooseGo pic.twitter.com/fJfphztS6C