After a later arrival following the Hawks game last night, the Habs didn’t skate today but they were available to the media. Scrums with Michael Cammalleri, P.K. Subban, Travis Moen and coach Randy Cunneyworth. 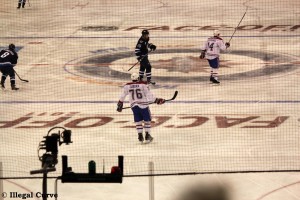 Michael Cammalleri – Coach talk a distraction to team?  Type of coach Cunneyworth is?  Asked about first goal scored in MTS Centre.  Keys to tonight.  Importance of first goal.  What is wrong with the Habs?

P.K.Subban – Trying to do too much.  Accountability.  Making mistakes.  Mood in the room.  Coach have authority?  Sticking to game plan.  Pressure on team.  Playing in front of the MTS Centre crowd.

Coach Cunneyworth – Welcome to Winnipeg.  Importance of tonight’s game.  Touches on loss to Hawks.  Taking anything from the Home Opener?   Close to having everyone on board?  Players being accountable.  Asked about coaching controversy.  Who he leans on.  Fun of being a head coach.