The Jets and Wild mutual animosity. 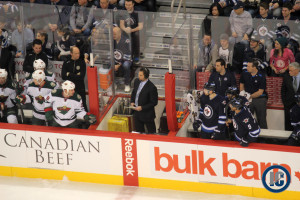 It is quite clear that these two teams do not like each other.  With the Wild being the Jets closest geographic opponent there has long been hope that these two squads would develop a rivalry.

Today was the first regular season meeting of five in 2014/15 between these two teams and following the Wild’s 4-3 OT win, Minneapolis Star Tribune reporter Michael Russo spoke to Wild defenceman Keith Ballard who had this to say:

Ballard on why game changed: “we spent entire 2nd pd killing & they spent the entire 2nd pd either on the power play or acting like idiots.”

Today’s game featured plenty of stick work, chirping from both benches and even a couple of fights, including captain Andrew Ladd dropping the gloves with the aforementioned and surly Keith Ballard.

Once again there were plenty of Jets fans in attendance at the Xcel Energy Center and that certainly adds to the atmosphere and rivalry.

We won’t get a chance for a rematch for over a month as these two teams won’t play again until a home and home series which starts December 27th in St. Paul and then is followed by a December 29th date at the MTS Centre.

What are your thoughts on the rivalry?  Is it real or artificial?