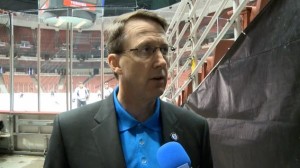 Mark Chipman –  Discussing the reports of a potential move from St. John’s to Thunder Bay.  What’s the timeline?  If it was to go ahead for Thunder Bay, any idea when?  Thunder Bay would have its own travel challenges would it not?  What is the arena project they are building?  Who else is part of the group?  Can St. John’s survive?

On reasons for moving team – “We made it clear if it became challenging from a geographical perspective than we might have to look elsewhere”.

On the arena – “This is early days for sure”.