Moose get another Jets prospect signed. 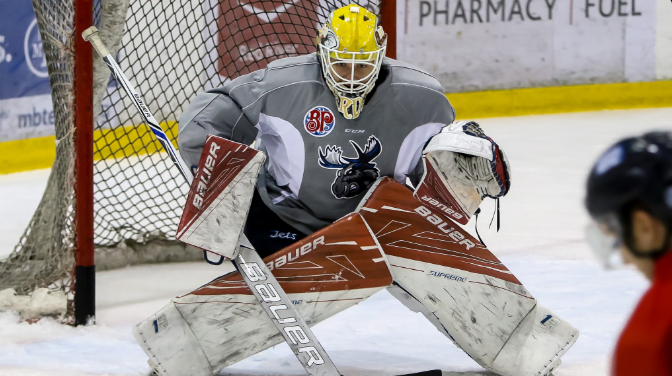 Add another Jets prospect to the list of players who have recently signed to spend some time with the AHL club.  Berdin you might recall scored a goal this season and had an epic celebration.

Berdin, 20, was a sixth round selection, 157th overall, of the Winnipeg Jets in the 2016 NHL Entry Draft. The Ufa, Russia native posted a record of 24-13-5, with a 2.65 goals-against average (10th – USHL), a 0.921 save percentage (4th – USHL), one shutout and scored a goal this season with the Sioux Falls Stampede of the USHL. In two USHL seasons, Berdin has made 76 appearances, while compiling a 38-25-9 record, supported by a 2.69 goals-against average, 0.922 save percentage and three shutouts. He has been named USHL goaltender of the week four times in the past two seasons.

Internationally, Berdin was a member of Russia’s 2018 IIHF World Junior Championship team. In 2015, he led Russia to a silver medal finish at the 2015 World Junior-A Challenge while being named a tournament all-star with the event’s best goals-against average (0.80) and save percentage (0.968).