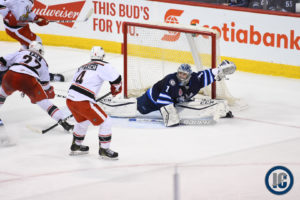 The Moose will kick off the 2017-18 campaign in Grand Rapids on October 6th as they take on the defending Calder Cup champs and they will play their home opener a week later when they welcome the 2015-16 champion Cleveland Monsters to town.  The full Manitoba Moose schedule will be released tomorrow afternoon.

In other Manitoba news they signed a pair of defencemen in Kirill Gotovets and Chris Dienes to one-year AHL contracts today.

Dienes, 24, completed a four season career at Western Michigan University (NCHC) last season, posting five points (3G, 2A) in 21 games.  During his NCAA career, Dienes amassed 41 points (11G, 30A) in 127 games.  The Traverse City, Mich. native was named to the NCHC All-Academic Team in all four of his collegiate seasons.  Following the completion of the 2016-17 campaign at Western Michigan, Dienes appeared in five games with the ECHL’s Adirondack Thunder, where he registered two assists.