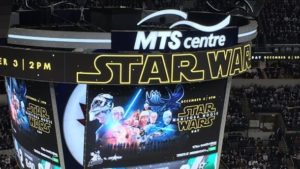 Part of the appeal of AHL hockey is they have a number of specialty games and tomorrow the team will be unveiling their Star Wars theme game.

The Manitoba Moose Hockey Club is pleased to announce details for Star Wars Day on Saturday, Dec. 3 when the Moose face the Texas Stars in a 2 p.m. CT puck drop at the MTS Centre.

Fans attending the game will feel as if they left Winnipeg for a galaxy far, far away as the conflict between the Rebel Alliance and the Galactic Empire takes over the MTS Centre.  The familiar sights and sounds of a Moose game will be replaced by elements from the Star Wars universe.  Even the players will sport a new look, wearing special edition Star Wars jerseys for warmup.  The jersey design will be revealed later this week.

The day would not be complete without the characters who make Star Wars such an iconic franchise.  Members of the 501st Legion – Canadian Garrison and the Mandalorian Mercs will be on the concourse bringing those characters to life and interacting with fans.  Moose fans attending the game are encouraged to take their first step into a larger world and wear their Star Wars best.  Fans dressing up as Star Wars characters will have the chance to win prizes throughout the night, even those a little short for a Stormtrooper.

As an aside I’m just impressed that some of these guys reference the old Star Wars movies.  Eric Comrie was born in 1995 yet he referenced a scene from The Empire Strikes Back which was released in 1980.

Still tickets available for what should prove to be an entertaining game off the ice and with the Moose having won their last three, it could be just as entertaining on the ice as well.