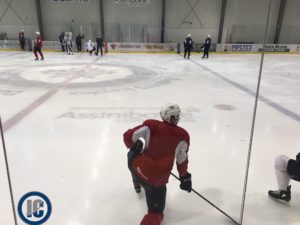 The Moose held a fairly long practice this morning as they continue to spend this week getting ready for the last two games of this eight-game home stand when the Iowa Wild roll into town for a 7 pm Saturday night contest followed by a 2 pm Sunday afternoon game.

Jets coach Paul Maurice announced that Steve Mason would play a game with Manitoba this weekend as he works his way back into game shape following his second concussion of the season.

After being sidelined with an injury since pre-season we saw Nelson Nogier back in a regular practice uniform after donning a non-contact one a little while back.  Today was just the second time he has worn a regular uniform as he continues to progress towards a return to the lineup.  Coach Vincent indicated the prospect is ahead of schedule and that he could see some action when the Moose head out on the road for seven games.

It’s been a long road back from injury for #MBMoose defenceman Nelson Nogier, he spoke about his progress and the excitement of being a full participant in practice #GoMooseGo pic.twitter.com/AGP6gP7OBR

While one defenceman is working his way back into the lineup coach Vincent indicated to us that Julian Melchiori suffered a concussion this past weekend in the last game.  “He has to go through the process” said the Moose bench boss.

While the focus on Monday was the trades made by Winnipeg the team did make a couple of papers moves as per the AHL transaction page which indicated the team assigned Michael Hutchinson and Jack Roslovic to Manitoba and then puled them right back up.  This allows them to be eligible for playoffs with the Moose.