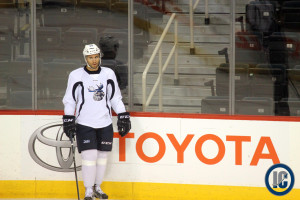 With the departure of last year’s captain John Albert to play overseas the Manitoba Moose were in need of a new leader.  The team signed the 2008 draft pick back on August 30th to a one year AHL deal, at which point I speculated that we may see the C adjourning his uniform for the 2016-17 season.  He has played all his AHL and NHL games within the Thrashers/Jets organization (52 NHL & 275 AHL) since the 2010-11 season.